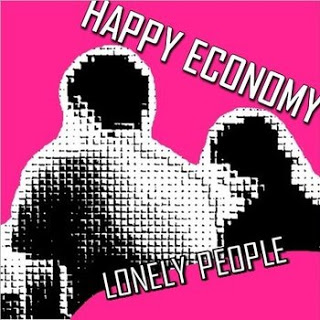 “Finding himself without a band for the first time in a number of years, Jason Reis began recording tracks on his own in late 2011. After recording over an albums worth of songs, he needed to find a singer to finish them. He enlisted his good friend Ryan Kramzer, and they began referring to the “band” as Happy Economy. Over the next few months the two completed the album. Entirely self-produced and self-recorded, they released Lonely People online in April of 2012. In order to play the songs live, Ryan Grisnik and Rob Nace were added into the fold. You can expect to see them playing all around Pittsburgh in the coming months, and a 2nd album is already in the works.”

Check out the band’s self-released debut “Lonely People” and check them out live tonight at the T’Bird on a bill with fellow locals Berlin Way. My thanks to instrumentalist Jason Reis for taking the time to participate in this edition of First/Last.

I got into music at a very young age, so I’m really not sure. I’ve just always had a record collection as long as I can remember. One of the earliest ones that I can remember would be “Crazy Nights” by KISS. I would have been 3 or 4 at the time.

I bought two at the same time. “Nocturne” by Wild Nothing and “A Different Ship” by Here We Go Magic. I’d recommend both.

Tough question, but I’d probably have to go with “Pet Sounds”.

I was a huge Rush fan when I was in high school, and even though I hardly listen to any progressive or hard rock anymore, I’ve continued to follow them. But I gotta say, I think their new album is pretty terrible. My 17 year old self would be devastated.

I saw Todd Rundgren at the Byham when I was 6. To this day I still believe that he’s one of the most criminally underrated artists and producers in the history of popular music.

I was dragged to a Metallica concert by a girl once. There was nothing good about it.

A great city with an ever-improving music scene. I’d love to see it move away from the blue collar type of bands that have dominated and head in a more interesting direction.

Thanks, Jason. I’m always impressed with a musician’s DIY ethic and will gladly feature them any day!