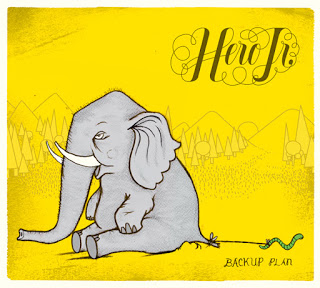 “Remember when rock’n’roll seemed to have it all? Passion, power, chemistry… and timeless songs that people could relate to? Hero Jr. does. And their forthcoming full-length debut Backup Plan is the perfect document to prove it. On it, the Indy-based foursome combine soaring vocals, stinging guitars and driving rhythms and channel them into 11 indelible, hook-filled songs that help define the blur between ’70s classic rock, the angst of the Alternative Nation and modern indie-rock. The band consists of brothers Evan Haughey (vocals/guitar) & Matthew Haughey(drums/vocals), along with bassist Dave DuBrava and the most recent addition to the band, guitarist Ken Rose(Marianne Faithfull). Backup Plan was produced and engineered by Paul Mahern (T-Bone Burnett, The Fray, Iggy Pop, John Mellencamp, Afghan Whigs, etc.) and Ken Rose, and was recorded at both Livingston Studios in London and Mahern’s White Arc Studio in Bloomington, IN.”

The band plays sister city Youngstown tomorrow night at Cedar’s Lounge along with The Robbie Jay Band to support my pals in The Hawkeyes as they release their new CD! My thanks to frontman Evan Haughey for participating in this edition of First/Last.

Thanks, Evan. Should be a great show. The Hawkeyes are one of my favorite local bands.