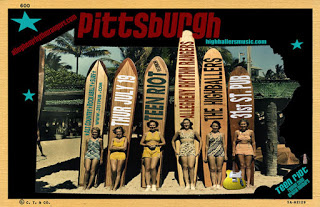 “The Highballers have been spinning heads for years with buttery sweet harmonies that meld perfectly with the hard twang of Fender telecasters. The Washington, DC alt country band taps into musicians like Johnny Cash, Waylon Jennings, and The Knitters. Singers Victoria Patchen and Kendall Jackson are reminiscent of classic duos Gram Parsons and Emmylou Harris, and Exene Cervenka and John Doe. The band does not fit into the tame, harmless pop mold fabricated by the corporate pop music industry that most people associate with country music. The Highballers have a long list of country and Americana influences along with rock, punk and indie. Recently, the band finished their first EP and will release a full album of originals in July 2012.”

The band returns to Pittsburgh tomorrow night at the Pub sharing a bill with The Allegheny Rhythm Rangers and the reunion of Teen Riot. My thanks to Kendall “Kenny Paul” Jackson (Guitar/Vocals) and Sean Lally (Guitar) for participating in this edition of First/Last.

Thanks, guys. Always nice to here someone from Pittsburgh is in an out of town band and you are so right Sean, shows seem to start WAY too late for me.