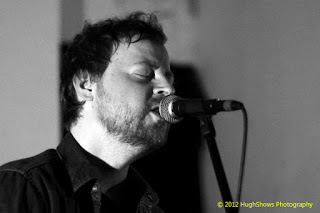 “Hotel Lights, featuring singer-songwriter and former Ben Folds Five drummer Darren Jessee (vocals, guitars, piano, keyboards), recorded Girl Graffiti with guitarist/engineer Alan Weatherhead (Sparklehorse, A Camp), Jay Brown (bass) and Zeke Hutchins (drums), both of Tift Merritt’s band, at The Sound of Music in Richmond, VA. The new record has the spirit of a live recording, but with a graceful, polished delivery—a testament to the musicianship and sound these four seasoned players have created together over the years. North Carolina native/Brooklyn-resident Jessee made Girl Graffiti with no pressure, only wanting to please his fiercely loyal fan base, his longtime band and himself. Most songs and vocals were tracked live in the summer, some with the band having just learned them moments before, like the gently stunning “My Own Cloud.” Others were finished in the cold of winter, like the album’s Rhodes-driven ballad “Super 8mm,” a true standout track where Jessee paints lyrical pictures that begin with an apropos mention of freshly fallen snow.”

I recently had the pleasure of catching the band at Garfield Artworks. I was able to pick up a couple discs there and I have to say, I haven’t flipped out so hard for a new band as these guys (well, him) in awhile. It’s my pleasure to thank Darren for taking some time to participate in this edition of First/Last.

Thanks so much, Darren. Really looking forward to seeing you again in the future.