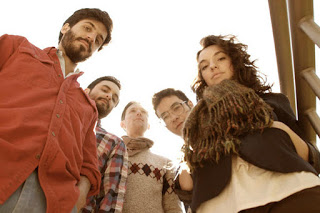 “Comprised of vocalist/guitarist Angelo Spagnolo, vocalist/keyboardist Mallory Glaser, bassist Robert Lundberg, multi-reedist Steven Lugerner, and drummer Max Jaffe – Brooklyn-based In One Wind has been called “one of the most inventive and satisfying new bands” by David Hadju of The New Republic. The sudden rhythmic & dynamic shifts of their music juxtaposed against simple folk forms creates contrasting musical spaces – a sound that is defined by the instrumentation of all five members.”

The band stops in Pittsburgh tonight at the Thunderbird celebrating the recent release of their new EP, “Lean“ on Primary Records. Supporting will be special guests Leverage Models and Sleep Experiments. My thanks to Pittsburgh native! Angelo Spagnolo (Guitars/Vocals) for taking the time to participate in this edition of First/Last.