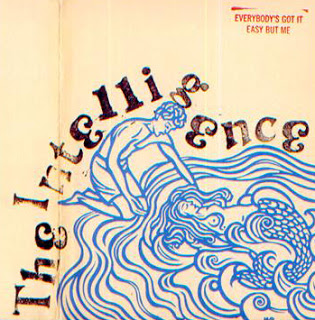 “The Intelligence have been a band / musical project since 1999. To date The Intelligence have released seven singles, five split singles, two EPs, seven albums and have made eight compilation appearances. I’ve probably even missed a couple. They join the ranks of artists like Thee Oh Sees and Ty Segall in the department of those whose output could be considered hyper-prolific or impossible to keep up with. That said, like the afore mentioned artists, with each release The Intelligence continue to evolve, grow artistically and top themselves. And, YES, you do need to keep up with all the releases. For those who haven’t been paying attention, The Intelligence are the brainchild of Lars Finberg (former of the A-Frames, currently of Thee Oh Sees and Wounded Lion). The Intelligence began as a studio project in which Finberg played all instruments on his home recordings. As the band began to play live and tour the releases have volleyed between full band recordings and Lars layering all tracks himself. On “Everybody’s Got It Easy But Me” Finberg has gone for a mixed approach. Having recently relocated to Los Angeles, Lars assembled an LA line up of the band. Still spending much time at the band’s original home base of Seattle, he has retained a separate line up in that city as well. For this new album he has used them both….as well as doing some songs all by himself. He also invited a number of guests to come in and add to it. The result is the most varied yet cohesive Intelligence album to date.”

The Intelligence release their newest record. “Everybody’s Got It Easy But Me” today and my thanks to frontman Lars Finberg for participating in this edition of First/Last.

With a birthday gift certificate I bought Madonna’s “Like a Virgin” and the Pointer Sisters “Jump” cassettes in the 5th grade. I realize it may sound like I am kidding.

A Dap Tone Records reissue of these cute R&B kids Bob and Gene called “If This World Was Mine” from Buffalo/1968.

The Country Teasers’ “Satan is Real Again” is up there, with John Coltrane’s “Lush Life”.

I heard some music by this rapper Action Bronson I kinda liked for a Ghostface Killa rip off and downloaded an album, then he posted a picture on Instagram of him pouring water on what he called “some drunk tranny” that I thought was mega lame and bummed me out too bad to listen to it so I deleted it.

Cyndi Lauper at the Bakersfield Kern County Fair in the 3rd grade. I thought she was great.

Besides being on tour, where I recently saw White Fence and The Mallard be the great bands they are a bunch, I saw The Walkmen a couple months ago, they were fantastic.

The Love reunion shows before Arthur Lee died in Seattle is up there.

Besides my own? Seeing Danzig embarrass himself at the Fun Fun Fun Fest in Austin was so brutal it was funny.

Man, we’ve been to Pittsburgh three times and were asked not to even play the first two because “no one is going to come because there is a Steelers game tonight”. The third time a couple (literally two people) walked in just as we were about to get paid to not play and they made us. We were happy to do it, I felt bad they had driven a couple hours away!

Thanks, Lars. I always revel in hearing about bands playing to a near empty house. Not because no one was there but because they had the balls to play for the people who did make the effort to show. Kudos to you!