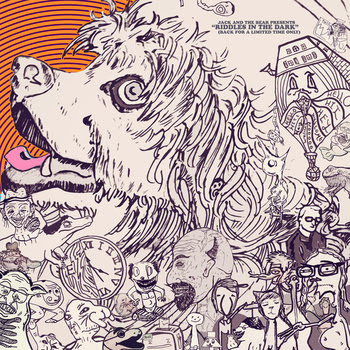 “Take three young siblings; one, a horn player; another, a guitarist/writer; and the last, a drum lord. Now, add to the mix two more heart throbs, equipped with keys, enthusiastic vocals, and of course a bodacious, booming bass. Mix all of these things together and you’ve got yourself a meal, a very different kind of meal, a kind of meal intended not for consuming through your mouth, oh no, but for your listening and viewing pleasure.”

Check out the band at their official Website, Facebook, BandCamp and Twitter. The Michigan folk-rockers roll into Pittsburgh on Sunday to play a show at Howler’s Coyote Cafe. I want to thank Brandon James (Guitar/Lead Vocals) for taking the time to participate in this edition of First/Last.

I was in 6th grade and it was “Dirty Deeds Done Dirt Cheap” by AC/DC.

“Sail Away” by Randy Newman.

That’s a tough one, currently I’m going through an intense Randy Newman obsession with his 1999 release “Bad Love” being my most listened to album at the moment. Every song off that album is pure gold.

Hmm, that’s a tough one as well but I have to say, I was a huge Mumford and Sons fan when they released “Sigh No More” so you can well imagine I strongly anticipated the release of their sophomore album, and when it finally came “Babel” turned out to be one of the most disappointing albums of all time for me. I don’t know of it’s because the songs all sounded quite similar to the first or I’d just grown tired of the pop/folk genre all together but man am I not a fan of that album.

The first noteworthy concert I can remember attending would be Aerosmith with Motley Crue… I was a huge classic rock fan throughout my freshmen year in high school… yeah.

I recently saw Gordon Lightfoot with my brother Adam and my grandmother and man was that incredible, and just a week later I took my lady friend to see the almighty Randy Newman.

Randy Newman was the best concert I’ve seen since Bruce and his E Street Band. It really is a toss-up between the two.

I saw KISS with special guest Motley Crue with my brother Adam about a year ago to relive our high school glory days and KISS delivered (even with the two new guys) however, Motely Crue should have never took their show back out on the road. I can describe their show in one word “Headache.”

Pittsburgh is grand. I’m pretty picky and opinionated when it comes to cities making my “cool list” but Pittsburgh made that list.

Thanks, Brandon. I have to admit, I know next to nothing about Randy Newman other than ‘Short People’ and Toy Story. I have to say that your glowing enthusiasm is making me reconsider that.