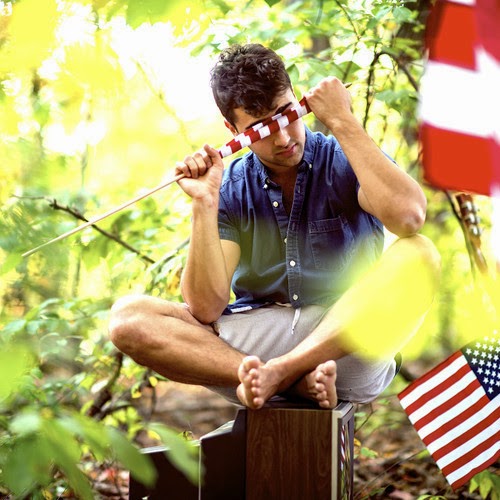 “If I can make a few heads bob, then I’m a happy dude. It all started with guitar lessons and a punk rock cover band. Since everyone in the group was afraid to imitate Jack White in “Seven Nation Army” I gave it a shot and it ended up scoring me vocal lessons. Ever since then, I’ve been endlessly engaged in various ways to express the never-ending rhythm in my body and the disastrous mess of words caught in my brain. Writing songs allows me to channel everything that happens to me into a piece of music and words that hopefully connects with you. I just wanna get the songs stuck in my head, stuck in yours.”

Jacob Klein is a singer songwriter originally hailing from Wexford, PA, now based in Nashville. You can dig his tunes from his Soundcloud and hopefully catch him playing out when he heads back to Pittsburgh the new year. I really want to thank him for taking the time to participate in this edition of First/Last.

Hard to remember, but honestly the first album I ever purchased may have been “Dookie” by Green Day.

Just took a trip to The Exchange the other day, which I LOVE, and I bought Jackson Browne’s “The Pretender” as well as James Brown’s “Please, Please Please”… also grabbed a CD copy of “Plans” by Death Cab for Cutie and admittedly… I also purchased Taylor Swift’s new album.

This is so tough… I really love Jackson Browne’s “I’m Alive”, but I obviously love almost every Beatle’s record.. especially “Hard Day’s Night” and “The White Album”. I also love pretty much every single album that Kanye West has released. Haters can say he sucks as a person, but that doesn’t matter to me considering how much influence he has had on the music scene as a writer and a producer. Undeniable innovation in his creative processes and progression as an artist… aside from the tabloid crap.

Pretty much any record that a classic group makes past their prime… I think everyone has the right to express themselves and make music for however long they want to, but when acts who have been on top of the world are still grabbing the spotlight for mediocre efforts, I wish that would go away… obviously this is very subjective.

Honestly… Panic! at the Disco at the old Tribune tent they used to put up in Station Square. Though their music may seem very dated now, the type of show they put on was astounding. Especially as the first show I’d ever seen. It truly was a circus on stage. So much stage production, lights, crazy actors and costumes, things I had never seen or dreamed of on stage before… and they did perform well underneath all of that. It was unique.

Just saw Chuck Prophet. One of THE best rock n roll shows I have ever seen. Aside from Butch Walker, I’ve never seen an artist take command of the crowd as well as the band like this guy did. If you’re not familiar, Chuck has a monstrous library of killer songs. Dense both lyrically and melodically, he was a big influence on me even before I saw him perform. His performance takes it to another level… I felt like I was watching Elvis or James Brown tear it up.

Another really tough one… considering I live for seeing good live music! As a whole, one of my fondest memories is the first time I went to a music festival. I went to Bonnaroo with a few other close friends… and being surrounded by that sort of positive environment is truly impossible to explain to someone who has not experienced it… But I saw a handful of legendary artists… some of which killed it (Paul McCartney, Tom Petty, Wilco, Local Natives, David Byrne and St. Vincent, Beach House, Tame Impala, to name a few) and some of which were mediocre. But the experience of dedicating a few days to soaking in that energy was life changing. Aside from that, one of the best concerts I’ve ever experienced was definitely Butch Walker. I went all by myself… Couldn’t find anyone who wanted to go, and had one of the best times of my life. I felt connected and engaged by the artist… which is rare. He really told a story throughout his set and went from performing solo on piano or guitar, to killing it with a four piece band. I left that show feeling higghhhhh and all because of the performer.

Gotta say, on my second venture to a festival, which was Lollapalooza in Chicago, I saw Calvin Harris. He’s an extremely influential DJ and songwriter and I was hoping for a unique show… considering he stands out from other DJ’s in that his earlier works which were heavily influenced by classic songwriting and adventurous production techniques created a pretty much unprecedented sound… yet he settled for throwing up his tunes on a laptop and DJ’ing like the handful of electronic artists I had seen earlier in the day… didn’t even bother SINGING his own SONGS. Definitely a huge let down…

I love Pittsburgh so much. It’s such a unique city filled with a really unique group of people. The group of supportive people here are a big part of why I continue to make a music filled career (and life) my top priority. Without the support I’ve received I would not be the person I am… and obviously we are all trying to grow and evolve with this world, but I can truly say that I would not be as able and confident in my twisted journey without this city. I’m forever grateful for the chance that was bestowed upon me by this enormous universe, and when I reflect on this, I am tempted to believe that things do in fact happen for a reason… I’m excited that I have experienced so many beautiful moments… Moments that I wouldn’t trade for anything. Aside from the musical aspects, just being a part of this city and growing up here has left me with many, many fond as well as painful memories… But that’s what makes our life so beautiful… the dynamic… the highs and lows. It is truly the place I call home and it has been a really amazing experience to watch it grow and evolve as I know it will continue to do. No doubt, Pittsburgh is a city of the world, and a place that compares to none other.

Thanks, Jacob. I second the Chuck Prophet love. Been a huge fan of his since Green on Red days.