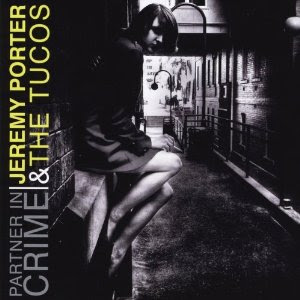 “Jeremy Porter & The Tucos are a Detroit band playing original Rock And Roll. They love their power-pop but they’re influenced by Gram Parsons, Uncle Tupelo and Waylon Jennings as much as Cheap Trick, The Replacements and X. It makes for an interesting, hooky blend of energy, melody, distortion and twang. Goes great with a cold PBR, whether you are crying in it or raising it up and singing along.”

Check out Jeremy at his official Website, Facebook, Twitter, YouTube and MySpace. He is returning to Pittsburgh tomorrow to hit up Polish Hill with his band, touring behind their just released album, “Partner in Crime“.
Let me just say that three years ago next week, Jeremy contacted me out of the blue and asked if I could promote his upcoming Pittsburgh show in any way. I explained to him that I shoot shows and post after the fact and since I am not a writer, maybe he could answer a simple questionnaire for a preview? He became the very first ‘First/Laster’ on this blog and exactly 400! First/Lasts later, I am so thankful to Jeremy for taking a few minutes to participate once again in this very special (for me) edition of First/Last.

“KISS Alive!” or “Cheap Trick at Budokan”. I remember hearing ‘I Want You To Want Me’ and just being drawn in by that melody. I couldn’t get it out of my head and to this day melody and hooks are my favorite parts of music. Truth is though, it was probably “Alive!”. I knew I wanted a KISS record, I knew it had to have ‘Rock And Roll All Night’ on it, and “Alive!” had so many songs. Seemed like a good choice. Funny that they were both live records!

Deadstring Brothers, “Sao Paulo” (Bloodshot). This record was not what I was expecting, just completely awesome in a different way. Sorta reminds me of some of the more country stuff on “Exile On Main St.”. I waited too long to get it, but I’ll be getting their new one when it comes out in a couple weeks right away. They’re from Nashville via Detroit so we’re all over it!

Tough question. It rotates around a bit I suppose. “Let it Be” by The Replacements is up there. “Exile on Main St.” (Rolling Stones) or “Quadrophenia” by The Who. “Zen Arcade” by Hüsker Dü. Springteen’s “Nebraska” is in the top 10 too.”

Not sure I have a least favorite album. Nothing comes to mind. I have a pretty low tolerance for things that are self-indulgent, excessively noisy, or lack hooks and strong melody. I just get bored. Nothing against that stuff, some people eat it up so it has its place, just not my cuppa tea.

Alice Cooper with The Rockets at the Alpena (MI) Drive In, ‘Special Forces’ Tour, July 4th, 1981.

Bob Mould at the Magic Stick in Detroit. Bob is back, in case you didn’t know. Great set heavy on material from his latest record “Silver Age” as well as SUGAR and Hüsker Dü stuff too. 26 years of seeing Bob Mould live and he’s still killing it!

Probably The Ramones at Harpo’s in Detroit in December of ‘88. An unbelievable onslaught of power and great songs. I’ve seen a lot of great shows, but that one has stuck with me.

The Grateful Dead, 1994-ish, The Palace of Auburn Hills, MI. I paid an (at the time) ungodly $35 to stare at the back of Jerry Garcia’s head for 3 goddamn hours. It was a waste of a buzz, money and time. I couldn’t wait to get out of there.

I’ve been to Pittsburgh a couple times. A few years back we went to a Penguins/Red Wings game. Got to see Mario Lemieux score a couple of goals, but the Wings won in OT. Then, this past June I was playing in St Louis when the 2 teams faced off in game 7 of the finals. We were the only people in the building who wanted the Wings to win. I don’t think the people there cared that it was the Penguins, but they desperately wanted Detroit to lose. Anyhow, I am happy for the Penguins to see success after almost losing the franchise.Pittsburgh is a cool, blue collar city like Detroit and I can’t wait for my show at the Rock Room on Friday April 6th!

Thanks, Jeremy. You are solely responsible for creating what this beast has become, my man! I will thank you forever for that, buddy!