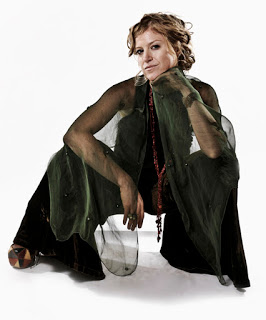 “A folk troubadour whose talents have been lauded on the national and international scene for almost a decade, Jess Klein writes songs that tell the story of the soul – from wrenching heartbreak to finding the strength to pick up and move on.

“The beauty lives behind a veil”, Jess Klein passionately sings on the rock- influenced title track of her new album. The songs on Behind A Veil are a direct result of a personally challenging 2011 for Jess; losing her father to a 5 year battle with ALS, splitting with a lover, and the self-empowering decision to move forward with no management or record label. Jess explains: “You never really know what the big picture is to a situation – sometimes the meaning is veiled. It can seem really bad, but then later you can look back at the same moment and feel so grateful it went that way; I love that about life. Sometimes things are just really hard and really painful, but also beautiful.”

We can never escape the emotions of love, loss, joy or pain, so Jess Klein courageously and honestly writes all about them in each of the 10 songs on her new release. Klein’s no holds barred album is set to hit the streets April 10, 2012.”

Jess brings her “Behind a Veil” CD Release tour to Pittsburgh tomorrow with guest James Wolpert. Jess was nice enough to take a few moments to participate in this edition of First/Last.

I love Pittsburgh! The first time I came there it was Halloween and I was invited to a big costume party thrown by WYEP. The people putting me up were a hoot. At the end of the night, as we got into the car, Kathleen Turner had just shown up and was standing outside. As we tore away, my host rolled down the car window and yelled out the window “Kathleen! Loved you in War of the Roses, baby!” Since then I always think of Pittsburgh as a crazy place where anything could happen! Another story – I came through once opening for John Gorka. I had volunteered my car for the tour; we were playing the Midwest and Pittsburgh. After the Club Cafe show, my car just completely stopped working on the way back to the hotel. This shouldn’t have been a big surprise as I was skimping on even the most basic maintenance. But since John Gorka is the nicest man on the planet, he walked in circles with me for an hour in the freezing cold while we waited for Triple A to show up. (That’s more of a story about John Gorka, but I think of it every time I’m there.)

Thank you Jess. Hopefully the car holds up tomorrow after the gig. If it doesn’t, maybe Kathleen Turner might give you a jump!