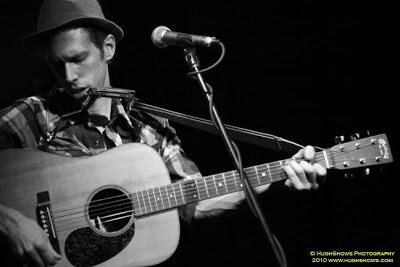 This is going to be one sweet show. Justin is supporting the next big buzz band Miniature Tigers, along with The Show. Purchase tickets here. You can check out some of Justin’s music here. As sound/light guy for Brillobox, I get to see Justin a lot, and have to give him big ups for bumping up those lights when I need it. He was cool enough to take some time out to participate in this edition of First/Last Friday.

This is a hard one for me because my memory is just the worst! I bet it was a Beach Boys or other surf record. I was really big into the Beach Boys LP’s my dad had and this carried over into when I started buying tapes of my own. Shortly after that I found rock and bought Gun’s and Roses’ “Appetite for Destruction”.

I use Rhapsody for virtually all of my music listening lately but when I couldn’t get the Sneaker Pimps’ “Becoming X” on there, I went out and downloaded that. Does that count?

I used to LOVE Bruce Springsteen’s “Born in the USA”. I can’t listen to it anymore and that is upsetting.

I work watching bands play as you know so I tend to go see bands play less either because I’m busy or need a break from live music now and then. That said the last show I went out to see was Chet Vincent, Lohio, and Ben Arnold at Howlers. The last big national show I went to see… gosh maybe that was last years’ Weakerthans show at the Rex. Maybe that’s wrong… again, my memory.

When I saw Wilco play 3 hours that felt like 45 minutes I left feeling exhilarated for days. Next to or equal to that would be seeing Elvis Costello play Lupo’s in Providence Rhode Island. This show was a huge undersold (obviously sold out) show that I managed to get into by just standing outside hoping someone would sell me a ticket. It was only $35 and it was two of the best hours of my life.

I was pretty let down by Matt Prior last time I saw him on the ‘where’s the band tour’ (Dustin Kensrue (of Thrice), Matt Pryor (of The Get Up Kids), Chris Conley (of Saves The Day) and Anthony Raneri (of Bayside)). As good as the show was, it’s really about nostalgia with those guys and it’s hard to be nostalgic for The Getup Kids when he played maybe 2 songs of theirs!

Pittsburgh took me about a year to begin to appreciate. I hear that’s common. As welcoming as it is, it’s equally as difficult to FIND the things you’re into here. Once you start to though, it’s a big snowball effect and the city takes hold quickly. I’m not sure if I’ll stay here forever but I will love it forever.

Thanks Justin. It’s funny about certain albums like “BITUSA”. They mold our musical tastes growing up but after listening to them ad nauseum, you would never care to hear them again. That’s exactly like “Dark Side of the Moon” to me. Have fun Tuesday brother.