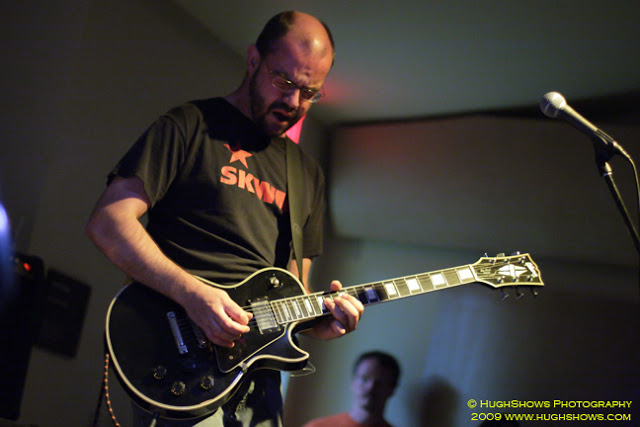 Karl Hendricks has been performing music in Pittsburgh since, well I am not the one to guess. Let’s just say for a long ass while now. He is undertaking a new endeavor that has me, as well as many countless grateful music fans in town happy as hell that he is. Word came late last year that Paul’s CDs in Bloomfield was closing shop. Almost instantaneously as that bummer news came, it was announced that the store would become Sound Cat Records, run by Karl. As many hours as I have spent browsing and buying there, I can easily recall Karl being there behind the counter for most of them. Recent trips have found that, as they turn over inventory, you can score some sweet deals in the process, probably up until late next week when he officially takes over the reins. Seriously, there are steals to be had right now. Karl was cool enough to participate in this edition of First/Last.

The ‘Grease’ soundtrack is probably the first album I remember choosing at the record store, when I was about eight years old, I think. But I kind of think of The Rolling Stones’ ‘Tattoo You’ as another “first” record. I got that as a present for my twelfth birthday, and that was sort of the beginning of thinking of myself as a record collector. Another milestone record for me, a few years after that, was Husker Du’s ‘New Day Rising’. I remember reading about them in Rolling Stone, and thinking “this is a band I’m going to like.” And that record sent me on a search for lots more obscure (at least to a teenager in McKeesport) music.

Well, I’m acquiring new music almost every day. Something I liked a lot from this last week, though, was a compilation of lesser known bands on the Flying Nun label called ‘Time To Go: The Southern Psychedelic Moment 1981-1986’. It, like a lot of great compilations, really is a neat snapshot of a particular time and place (the place being the southern part of New Zealand)—and speaking of searching for obscure music, it reminds me of the excitement I felt searching out stuff as a teenager in the mid-‘80s.

It is very difficult to narrow it down to one, but if pressed, I’d have to say Silkworm’s album ‘Firewater’. I think Silkworm, and particularly that album, do a great job encapsulating pretty much all the different elements that make rock music (probably) my favorite art form.

I’d rather focus on the positive.

My mom was a big influence in my interest in music, and she took me to see the Iron City Houserockers, who were probably her favorite band at the time, when I was around twelve. Shortly after that, I went to my first big rock show, which was Styx at the Civic Arena. I reviewed the show on the front page of my grade school’s newspaper (of which I was also the editor).

I saw Carousel at the Thunderbird. Jake Leger, who plays drums in my band, is also in Carousel. They rocked, and Dave Wheeler played some excellent guitar solos.

I don’t think I can narrow it down to one—but a seminal one for me was Firehose, Slovenly and DC3 at the Electric Banana probably around 1986 (or ’87?). It was one of those moments that felt monumental in figuring out why music was important to me personally. Some of my best memories of shows are also usually bands that my band has toured with, and so who I get to se multiple nights in a row. Something about that makes me appreciate a band even more, and I have some particularly fond memories of Silkworm (and the band that followed, Bottomless Pit), Small 23, Smog, Kind of Like Spitting, and the Kyle Sowashes.

This is by no means my least favorite, but worth mentioning, since I’ve mentioned them so much already, is that the first time I saw Silkworm in 1995 (my band was playing a show with them in Princeton), I really didn’t like them. It wasn’t until I heard one of their albums (Libertine, the one before Firewater) a few months later, that I “got” it. And I think that’s sort of a model I’ve followed as a music listener pretty much my entire life. I don’t always trust my gut—music has a lot more to give you if you go to it rather than always force it to come to you.

From my travels and from the comments I’ve heard from visitors over the years, I’ve come to realize that Pittsburgh has a lot more culture—more opportunities to experience music, art, and literary events—than most other cities of comparable size. And I do appreciate that, though for the past dozen years or so, I’ve been so busy working that I haven’t really taken complete advantage of that. But it’s nice to know it’s there.

Thanks Karl. Not only for the interview, but keeping my favorite store in Pittsburgh afloat! I, for one, would love to see some much needed in-store performances happening, ahem.