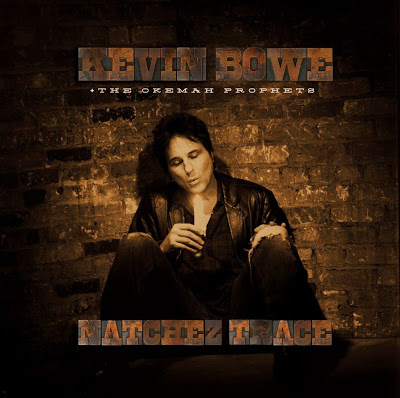 “The Okemah Prophets (Oh-kee-mah) are a band out of Minneapolis, led by singer/songwriter Kevin Bowe. Bowe has a long history as a guitarist/writer/producer, landing 3 platinums and songs on 2 Grammy winning albums working with Paul Westerberg, Jonny Lang, Kenny Wayne Shepherd, Etta James and others. The Okemah Prophets are what happens when he’s singing and playing his own songs….their live shows are a reminder that American rock and roll will always be cool, no indie rock posturing needed here, just soul, songs and a 3 piece band to play them.”

Check out Kevin and the band at the official Website, Facebook, Twitter, and MySpace. They swing into Pittsburgh tomorrow night night in support of their fantastic, latest release, “Natchez Trace“, on a bill with Melinda Colaizzi. My thanks to Kevin for taking a few to participate in this edition of First/Last.

Thanks, Kevin. Dig the Pittsburgh connection to Melinda. Should be a sweet show.