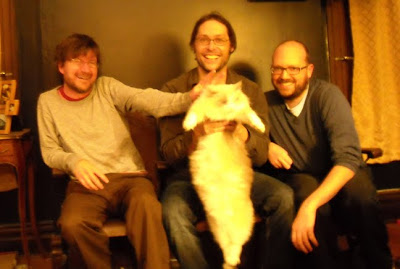 Thee Shopkeepers are a local ‘indie rock’ band that will be playing on CMU’s fantastic campus radio station tonight at 9 p.m. Listen online here. They also have a gig next Thursday November 4 at the 31st Street Pub. The guys were nice enough to participate in this special trio version of First/Last.

Kurt Garrison: Born in the USA – Bruce Springsteen. I can still jam to “I’m on Fire”, “Glory Days” and “I’m Going Down”. But the title track? Eh, not so much. Scott Silsbe: While I have great memories of listening to records and cassettes when I was a youngster—like the first couple Monkees records and Michael Jackson’s Thriller—I don’t remember if I actually bought any of them for myself or if they were just hand-me-downs. I have a clear memory of buying my first CD with my own money though, and that was Pearl Jam’s Ten.

Scott: The first XTC album, White Music. Though I’ve also got a nice reissue of The Wedding Present’s George Best on hold for me at Desolation Row—I should be picking that up any day now.

Kurt : The first one that always comes to mind is Slanted and Enchanted – Pavement. Anyone who says that it’s a blatant rip-off of the Fall is lazy (including Mark E. Smith)…Apologies to the Queen Mary – Wolf Parade is a close second…and A Love Supreme – John Coltrane is something that I’m still trying to wrap my mind around twenty years after first listening to it.

Scott: This is hard to say of course, but I’m going to go with My Bloody Valentine, Loveless. I like everything about that record.

Kurt: Exile on Main Street. Easily. I love the Rolling Stones — the Brian Jones-era Rolling Stones, that is — a band that perfected the art of poorly interpreting blues standards and creating something completely new and exciting in the process…but then Brian decided to go swimming one night without his floaties and Mick and Keef took over, actually believing that they had Southern Soul, which eventually led them to hire a bunch of hilljack mercenaries looking to pay off an overextended bartab. (At least this is the story that I’ve concocted.) If you’re a fan of session musicians pulling the weight for a bunch of coked-up limeys one music fad away from doling out blow-jobs in a Studio 54 bathroom, then this is your jam. Regardless, I’m still waiting for that Bill Plummer solo album.

Scott: Hmm, another hard one. I’ll go with my most

disappointing album being Weezer’s green self-titled album. Maybe I just liked Pinkerton too much. Or maybe I didn’t realize how essential Matt Sharp was to that band. In a similar vein, Wilco’s Ghost is Born was pretty disappointing to me.

Kurt: Paul Simon at Hershey Park (Back off, a pretty girl asked me.)

Scott: My parents took me to see Neil Diamond at a big outdoor venue outside of Detroit called Pine Knob. I think this around 1984. I mostly just remember my sister hoping he’d play “Turn on Your Heartlight,” which she called “The E.T. Song.”

Kurt: Polvo at the Brillobox.

Scott: Well, I’ve seen some good indie shows around town lately, but one of the most memorable big things for me lately was seeing Polvo up at Brillobox. I never saw them in the 90s, and they’re a pretty incredible live band.

Kurt: There have been a few…shoegazers Ride at the old 9:30 club way back in ’93…Archers of Loaf at Albright College during the Ickey Mettle tour…Run DMC at the Stone Balloon at U. of Maryland in ’97…Mogwai at the Troubadour during the CODY tour…hell, Miles Kurosky kicked serious ass at the Brillobox back in March. However, my favorite would probably be Belle & Sebastian in Glasgow at the Botanic Gardens in ’04; one of those “Life is Good” moments.

Scott: I guess I’ll go with when CMU brought Fugazi in. It was one of those free outdoor shows and I’d never seen them before. I was so excited that I didn’t believe it was actually happening. And Fugazi really ripped it up too—they sounded great. I guess I still don’t believe I saw them for free here. But there was a great moment when they were setting up their gear and drummer Brendan Canty’s big dinner bell was walked across the stage. All of us music nerds up front started cheering for the bell.

Kurt: Seeing Mogwai at the World(?) in the Strip District. It was the polar opposite of the Troubadour show…the volume was very low and un-Mogwai-like. I blame the club. And The (C)Rapture opening. A total yawnfest.

Scott: Oh man, another tough question—I think I try to block out bad concert experiences. I remember having a bad time at a Black Keys show down in The Strip once. Maybe it was just my mood or the venue or something, but I recall my friend Kris not digging it either—we just left there thinking, “We paid for this?”

Bob: The Detroit Cobras phoned one in last year at Mr. Smalls when no one showed up.

Kurt: You can do whatever you want here. People like to bitch about the “scene” — although I’m not even sure what the hell a scene is…bands that have a similar sound? Bands that go out to dinner together? Shop together? Maybe take in a movie? Just make noise. There are plenty of great places to play and tons of great people to play with. I wouldn’t want to live anywhere else.

Scott: Pittsburgh’s great. It’s such a fun place to both play music and go out to see music. There’s a whole mess of talent here, so whether you’re going down to Howler’s to catch a tribute night or going to the 31st Street Pub to see some local bands and maybe an out-of-towner, you’re probably going to have a good time. One thing I really appreciate is how often bands from different genres play together on the same bill. I mean, it’s all indie music, I guess, since none of us are signed to a major label, right? But I like when I go to see a local show and there’s a band with a country twang, then one with a very 90s Indie Rock feel, then, say, one with a more of a Metal feel. I like that there are many different versions of “The Pittsburgh Sound” right now.

Thanks fellas. Have fun during the radio set tonight, I’ll be listening for sure.