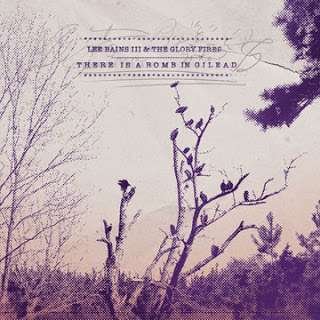 “The title of LEE BAINS III AND THE GLORY FIRES’ debut album comes from Bains mishearing an old hymn as a child. In the soft accents of his elders around Birmingham, Alabama, “There is a balm in Gilead” sounded a lot like “There is a bomb.” It fits, really. The Glory Fires learned to construct music in the churches of their childhoods, and learned to destroy it in the punk clubs of their youths. As much Wilson Pickett as Fugazi, as much the Stooges as the Allman Brothers, Birmingham, Alabama’s Lee Bains III & The Glory Fires have brought radical rock’n’roll to bear on their own experience and their own place. On ‘THERE IS A BOMB IN GILEAD,’ they deconstruct the music of the Deep South, strip it down and reassemble it, to make a righteous ruckus that sits at the vanguard of the vernacular.”

The band’s debut is really kicking my ass this summer and I just had to extend an invitation to Lee to participate in this edition of First/Last.

My last trip to the record store resulted in The Police’s self-titled album, and Charlie Daniels’ first album (prior to “Charlie Daniels Band”). I’d never been crazy about The Police, but I heard that first album in its entirety recently and was blown away. It has some pretty amazing writing, and that scrappy sound that only a killer three-piece can pull off. My daddy and I listened to Charlie Daniels a lot growing up, but this first record is really weird, without a hit on it. Billy Cox from Band of Gypsys plays bass on it, and there was clearly some strong acid being passed around.

Whew. Big Star’s three albums regularly overtake one another as my favorite. ‘Eat a Peach’ by the Allman Brothers. ‘Hey Jude’ by Wilson Pickett. ‘Bealtitude’ by Staple Singers. ‘Let It Be’ by The Replacements. ‘Exile on Main Street’ by the Stones. ‘Raw Power’ by the Stooges. ‘Flyin’ Shoes’ by Townes Van Zandt. ‘Velvet Underground and Nico.’ ‘Aquemini’ by Outkast. ‘No Division’ by Hot Water Music. ‘Reinventing Axl Rose’ by Against Me! ‘Rocket to Russia’ by the Ramones. Crooked Fingers S/T. ‘Super Tight’ by UGK. The Dexateens’ ‘Red Dust Rising.’ ‘Leon Russell and the Shelter People.’ The Old 97’s ‘Wreck Your Life.’ (I just saw Rhett Miller did an interview.) Drive-By Truckers’ ‘Dirty South.’ Jack Oblivian’s ‘Saturday Night, Part 2.’

I’m sure the worst is yet to come.

My daddy and I saw Lynyrd Skynyrd and the Allman Brothers within two days of one another when I was 12. The day in between the two shows was July 4th. I don’t remember which show was first, but I do remember that I felt pretty dadgum American by the end of it.

I think the last show I saw that we weren’t playing ourselves was to see the Drive-By Truckers in Atlanta. It was my first time seeing my buddy Matt play bass with them.

There are several shows I list as my all-time favorites, but seeing Against Me! on tour for their first album in Birmingham’s all-ages venue with 50 other sweaty, hollering kids was way up there.

When that first Sun Kil Moon album came out, ‘Ghosts of the Great Highway,’ I listened to it all the time. My current girlfriend and I made out for the first time listening to it. It was, at the time, my favorite album, and I had a pretty intense connection to those songs. But then I went to see the show in New York, and this really private, delicate music was being played quietly to a big, loud room packed with a bunch of drunk, yammering yuppies. It was like the Mona Lisa was being displayed in the infield at Talladega, or something. I just left halfway through.

Well, I’ve never been to Pittsburgh, I’m sad to say, but Birmingham used to be called the Pittsburgh of the South, and I love Birmingham. So, if Pittsburgh is like the Birmingham of the North, then I think I’d probably like it a lot, too. Our guitar player Matt actually lived up there for a little while, and regularly mentions the Italian neighborhood he lived near and y’all’s tendency to say “n’at.” Shamefully, that’s about all I can say about Pittsburgh. I also did a book report one time on Roberto Clemente.

Thanks so much, Lee. Really loving the album and looking forward to a Pittsburgh gig in the hopefully near future.