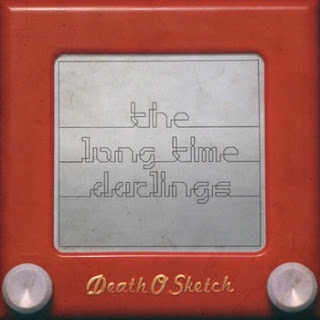 “Forming in October of 2008, The Long Time Darlings agreed on a simple mission statement: Make exciting records and play memorable shows. The band wasted no time putting this mission into action playing their first show in December of 2008 to a packed house at 31st Street Pub and completing their debut demo “Skeleton Pirate” at the top of 2009.”

The band can be found at their official Website, Facebook, Twitter, YouTube, MySpace and Iron City Rocks. As Christmas arrives early, I am really excited to be bringing you the premier of TLTD’s brand new EP, “Death-O-Sketch” for a free download. Three tunes of balls to the wall crunchy rock offered up for your listening pleasure. My thanks to Brett Staggs (Vocals/Guitars), Brian Sproul (Lead Guitar) and Doug Kochmanski (Drums) for taking the time to participate in this edition of First/Last.

Thanks, fellas. Too cool of you to let me introduce the EP! Happy Holidays, brothers.