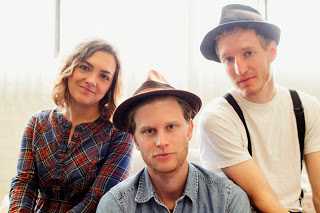 “The roots revival of the last few years has primed listeners for a new generation of rustic, heart-on-the-sleeve music—the kind that nods to tradition while setting off into uncharted territory. The Lumineers walk that line with an unerring gift for timeless melodies and soul-stirring lyrics. Born out of sorrow, powered by passion, ripened by hard work, The Lumineers have found their sound when the world needs it most.”

I have totally been loving this new record by these guys. They are opening for Brandi Carlile this upcoming Monday AND are sharing a few tour dates with my brothers and sister in rock (analog, synth, or otherwise), Good Night, States. My thanks to Ms. Lumineer herself Neyla Pekarek for taking a few minutes to participate in this edition of First/Last.

Thanks, Neyla. Really jazzed to catch your set. Hopefully we can witness that ‘Anna Begins flip’? That would be quite outstanding!