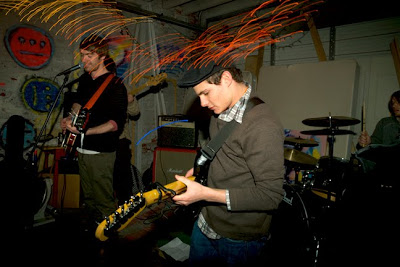 Today I feature what could possibly be the luckiest band in Pittsburgh this weekend. Legs Like Tree Trunks are college students who are opening an extremely high profile free gig for Ke$ha on Sunday afternoon in the heart of Oakland. The band won the spot in a competition for musicians who attend Pitt. They take the stage at 1:30 (Ke$ha @3p.m.) and this should turn out to be a massive crowd for them to perform in front of. Get a taste of the band with a live radio session here. Bandmates Matt and Dave were cool enough to participate in this “dude, are all those people here for us?” installment of First/Last Friday.

Matt Holden: I think I traded a chocolate bar for one of my cousin’s Spice Girls cassette when I was five. Pretty sure I got swindled there. On my 13th birthday, my parents gave me OK Computer by Radiohead and Room on Fire by The Strokes. Those two records were and still are huge influences.

Dave Cerminara: I bought a Collective Soul record along with the Space Jam soundtrack all in the same trip to the mall when I was like 8. After that the next record I clearly remember buying was Full Collapse by Thursday when I was 12.

Thanks fellas. Have a blast on Sunday. Any way you can score me a photo pass now that you’re big time!