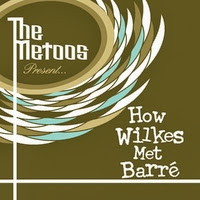 “The Me Toos are a collaboration of three diverse and talented musicians from Pittsburgh that generate a blues-based sound that can only be admired and not compared. The Me Toos were created in 2008 by guitarist/singer Jesse Baldoni and bassist Ben Vivio. Long time drummer Tom Pashby’s recent departure gives the band the opportunity to introduce to you Aims Villanueva. They are very excited to say the least. The Me Toos’ distinct blend of blues, rockabilly, pop, garage, and rock n’ roll will be sure to keep you on your feet!”

Check out the band on Facebook, ReverbNation, and Twitter. Their debut full-length is 2011’s “When Wilkes Met Barre” and as they prep a follow up, I want to thank Jesse Baldoni (Guitar/Vocals) for taking the time to participate in this edition of First/Last.

I’ve been here for ten years, and the city seems to be in a constant state of revival. It’s been really exciting finding new music to explore and new scenes to be a part of.

Thanks, Jesse. Ouch on that Wilco show. Are you sure it wasn’t the band that gave you those bummer memories? Or should I say that less than ideal venue to see a show.