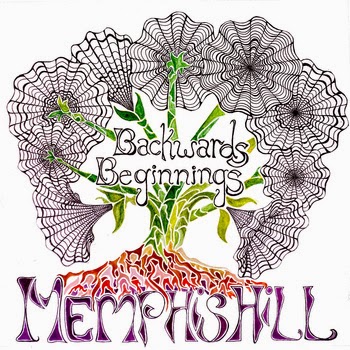 “Memphis Hill is a blues rock band with psychedelic and jazz influences based in Pittsburgh, PA. The band was officially formed in January 2013 in preparation for their first live performance which took place in February at The Space Upstairs. Memphis Hill has it’s roots in improvised jamming. The band members had been jamming together for fun for years before their first performance, which consisted of a few covers and about a half hour of improv. The band began moving away from their roots shortly after their first show and has placed a heavy emphasis on writing and recording, particularly since the arrival of guitarist Mac Inglis in August ‘13. Since then, they have played several shows around Pittsburgh and Rochester, performing mostly original music. Memphis Hill plans to release a full length, self-produced debut album early this summer!”

Memphis Hill is a Pittsburgh blues rock band who’s latest release is entitled “Backwards Beginnings“. Hear some of it live tomorrow night, Saturday (2/7) at Howlers as they share the share with blog faves Sun Hound and Coastal Remedy. I want to thank Elle Allen (Vocals) for taking the time to participate in this edition of First/Last.

I think “Gorillaz”, by the Gorillaz, when it first came out in stores in 2001. My caretaker at the time (I was 9) thought it was a kid’s album because of the cartoon representations of the Gorillaz on the front and it quickly (and to her dismay once she listened to it) became one of my favorite CDs.

The last full album was the soundtrack to ‘Pirate Radio’ (“The Boat That Rocked”).

Man. Tough one to answer, for all of us I think. “At Dawn” and “Okonokos” by My Morning Jacket are two of my favorite albums to listen to the full way through, although I think favorites of some other band members include “In Rainbows” by Radiohead, “Tell ‘Em What Your Name Is” by Black Joe Lewis and the Honeybears, “The Big Come Up” by The Black Keys, “Easy Beat” by Dr. Dog, “Boys and Girls” by the Alabama Shakes… the list goes on.

As much as it sucks to bash on another artist’s work, the 2011 Black Keys album “El Camino” was a pretty big letdown after their previous music.

Bridge School Benefit with Neil Young in San Francisco, in 2005. My dad took me, and we saw Dave Matthews, Jerry Lee Lewis, Norah Jones, Emmylou Harris, Los Lobos, Bright Eyes and Good Charlotte all in the same day sitting on a blanket in the grass.

Most recent concert (with the whole band together even) was seeing Beauty Slap,an electronic and brass band artist, at the Pittsburgh Winery at the end of the Strip District Music Festival where we’d played earlier in the day. Great show.

Patti Smith at the Bowery Ballroom in New York in 201. Hands down. She was absolutely amazing, and had the charm to joke with the audience about using her reading glasses up on stage to see pages of lyrics that she hadn’t had to revisit in years. That woman’s still got it. Although honorable mention to the Pimps of Joytime; their live shows have the most incredible energy I’ve ever seen from a band on stage.

Honestly, the negative experiences don’t stick out enough to remember. I’ve never been to a concert so egregiously bad that it stayed in my head. Vic, our lead guitarist, saw a terrible concert by Spoon at Bonnaroo, and he says it changed his approach to being in a band, and it made him realize the importance of live shows and their impacts on an audience.

I came out to Pittsburgh for school from California, and I honestly love it here. I’ve already stayed here a year longer than I was planning to, and have a hard time thinking about a future when I’ll be leaving. Great food, amazing music and some of the best people you can find. Pittsburgh is a truly warm and incredible city. And so many places to explore!

Thanks, Elle. A Bridge School show? That is awesome. I’ve always wanted to hit one of those.