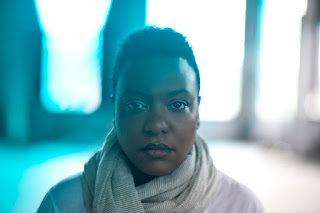 “Meshell has changed. So has her music. It’s more peaceful, freer. Her new album, Weather, cloaks itself in the colours of autumn, full of in-between shades and hues and with a certain mildness to it. The singer has let her feelings carry her along. Meshell has never been scared of sharing her most intimate thoughts in explicit or colourful terms that always come from the heart. As ever, she is true to herself. But Weather’s folk sensibility and pregnant acoustic melodies make this a supremely accessible album.
“For a long time I was at war with everyone else. I dug my heels in, I fought hard. That’s all over now. I have my opinions, but they’re no longer a source of conflict with the rest of the world.” On Weather Meshell’s usually deep vocals slip into a register more like a whisper, sharing secrets about subjects that are straightforward, almost light-hearted. She has pared down her style to something like pop. “I started to write this album on the guitar and you can hear it. The final atmosphere’s gentler.”

Meshell brings her tour to Pittsburgh one week from tonight for a free gig at Hartwood. I want to thank her for taking a few minutes to participate in this edition of First/Last.

Thanks, Meshell. You’re going to love the Hartwood stage. Probably nothing like playing to a rolling field of happy fans.