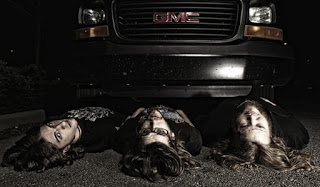 “On August 1st 2007, John Goff was pronounced dead. He died in his small house in Abilene, Kansas from a severe asthma attack. This was the influential event that caused John’s best friend Steve Moss, to start The Midnight Ghost Train, as a eulogy to John. “Something had to be done,” Steve says. “John’s memory and life has to be remembered in some way.” Moss then moved to his hometown Buffalo, New York with a plan to start a band, record a record, and go on tour. This was the idea and the drive that fueled The Midnight Ghost Train’s engine. With nonstop touring in both the U.S. and Europe, TMGT now currently spends ten months a year on the road, playing as many shows as they can book. If they had it their way they would play 365 days a year till the day they die. They have no booking agent, and even though there has been several offers the band has no record label backing them up. “Judging from their quickly growing fan base, their drive, determination, hard work, and mind blowing passionate live show, I don’t know why a great label hasn’t picked them up yet” –Torche Magazine. But TMGT is not concerned about signing with a label, they prefer holding out for the right one. Their main goal is to tour as much as possible and hope to leave their artistic impression on the world.”

The band is touring behind it’s newest release “Buffalo” which you can pre-order a limited edition with the first 500 copies of the LP pressed on a mixture of “ox-blood” spatter-and-opaque vinyl. Yeah, no shit. They return to Pittsburgh tomorrow at the Pub. My thanks to Steve Moss (Guitar/Vocals) for taking a few minutes to participate in this edition of First/Last.

Thanks, Steve. That vinyl option is the coolest thing ever…well, if you’re not a vegan or anything.