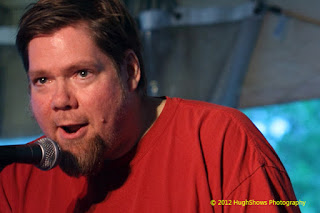 I have been ‘unofficially’ shooting shows for WYEP-FM for two years now and I am celebrating this week by bringing you a special series of First/Lasts with the station’s on-air personalities. We continue today with Mike who is the host of the Midday Mix for WYEP as well as being the station’s Music Director (and a certified Beatles nut). My thanks to him for participating in this edition of First/Last.

The first album I ever bought with my own was a vinyl copy of Talking Heads’ ‘Remain in Light.’ I had seen the video for “Once in a Lifetime” on a segment of the classic Canadian sketch comedy series SCTV, and I was hypnotized by it. Of course, when I got the record home I discovered to my horror that that song skipped. So I returned it for another copy, and damned if that second record also skipped during “Once in a Lifetime”! So I gave up and dug into the rest of the album. As a kid, I bought more pre-recorded tapes than vinyl records, so I guess I should mention that my first tapes purchased were Pink Floyd’s ‘Dark Side of the Moon’ and ’21st Century Man’ by Aussie rocker Billy Thorpe. When I got my first CD player in 1985, my first CDs were Joe Jackson’s ‘Night & Day’ and, in an homage to my first tapes, the ‘Dark Side of the Moon’ again.

I bought a CD from a terrific New York singer/songwriter named Dave Keener. It’s called ‘The East Way.’ He’s never been signed to a label, he’s self-released everything he’s ever done. One of his songs was covered by the band King Missile back in the day, though. His songwriting is awesome.

I think today I’ll answer that with The Beatles’ ‘Revolver.’

I’ve heard a lot of awful albums over the years (sometimes even gloriously so!), but most of them can’t really be characterized as disappointing. One of the more disappointing albums that come to mind is Peter Gabriel’s ‘Up.’ It had some worthwhile songs on it, but after a 10 year lapse since his previous regular album ‘Us,’ I felt like, “It took a decade to make THIS?”

For years, I answered that question with O.M.D. in Syracuse, NY in 1985 during their ‘Crush’ tour, but a few years ago I tried to list out all of the concerts I’ve attended using ticket stubs and memory and I realized all these years I was mistaken. My first concert was actually U2 with Lone Justice at the Hartford Civic Center on April 20, 1985.

I was just at the Great Blue Heron Music Festival at Sherman, NY last weekend. Donna the Buffalo, the Hindu Cowboys, Big Leg Emma, and Ron Yarosz & The Vehicle were the bands I caught. It’s a great, low-key music festival in a beautiful farm land setting.

For small venues, it might just be Jonathan Richman & The Modern Lovers at The Haunt in Ithaca, NY in the fall of 1986. It was the only time I’ve ever seen Richman with more than one backing musician and he was so much fun that night. For large venues, it would be either the Rolling Stones ‘Steel Wheels’ tour at Shea Stadium in NYC in 1989 for the sheer spectacle of it or Paul McCartney opening up the Consol Arena August 18, 2010 (which was just a great show).

From one perspective, it might have to be seeing Fiona Apple at the Roseland Ballroom in NYC on March 2, 2000. She kind of had a nervous breakdown onstage. After some technical problems in the first few songs, Apple got progressively more upset and, seemingly imagining an audience full of vicious rock critics, she began berating and yelling at the audience. Although what little music was performed was marred by sound problems, it was an interesting evening, to be sure. But at least that was an aberration from a talented musician. I’ve also been seen awful shows from awful bands, like Creed. I like to pretend that those didn’t happen, though. I could also include the Butthole Surfers in July 1996 at Convention Hall in Asbury Park, NJ. The band was apparently trying to clear the room with unpleasant feedback and atonal noise, but although I didn’t enjoy the music I understood that that’s part of their charm. It was more interesting to observe than to enjoy.