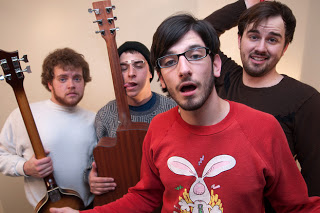 Mindfish are a four piece self proclaimed ‘Nerd-Rock’ band from Toledo, OH. They are releasing their new album ‘Watch Out!’ this month and are celebrating with a tour that includes a stop at the Thunderbird tonight. Also on the bill are Pittsburgh bands White Like Fire and SleepyV. I want to thank Mind Fish’s lead vocalist Dean Tartaglia for taking a few minutes to participate in this edition of First/Last.

Nevermind by Nirvana…and it is still my favorite/most influential to date.

I stopped buying albums once I got Spotify, ha ha…But no in all seriousness, I recently purchased a local band from Cincinnati OH, ‘The Yugos’ first LP (titled, ‘The Yugos’). I LOVE it. They are these 16 year old kids we played with once (except their bassist is 35). It sounds like they fell backwards into a perfectly produced record…it’s effortless…can’t stop listening.

See first question… But I will give “… Is A Real Boy” by Say Anything a close 2nd. First “Indie” record I ever became obsessed with. I learned that you could ‘Break the 4th Wall’ as a song writer.

It was a ‘Weird Al’ concert when I was 7. I cried in my mother’s arms from the moment he got on stage and didn’t stop until he left. He had a projector playing his video for “Jurassic Park” during the performance of that song. I got real nauseated when Barney’s head got eaten.

My favorite live band from Detroit, MI called The Hard Lessons played their big Christmas Blowout show at St. Andrew’s Hall in Detroit. It was a great show with 6 bands in total. An all-girl teen band called Smudge Candy ended their set with ACDC’s “Big Balls”. It was the highlight of the night….The Hard Lessons killed it as well, but they have a 6 month old son, so the show ended promptly at 11:30, ha ha.

Too many, ha ha…I’ve seen Crash Kings 3 times, and they are some of the most talented musicians I’ve been lucky enough to see… Foo Fighters is the best ROCK/ARENA/LETS WHIP OUR DICKS OUT kind of concert I’ve ever been to, mostly because they understand everyone’s there for the Bud Light, Dave Grohl and man sweat… and OK GO gets the runner up for most confetti at one place ever witnessed.

Again.. probably gotta go with the whole ‘Weird Al’ experience… OH, actually…Another band I play saxophone for opened up for Coolio at the end of 2011… Weirdest shit ever…That dude is still going at 48, but he played to like 100 very bored middle-aged white hicks, and he looks like an alien now, with his two remaining braids…Sorry Coolio!

From the two times I’ve ever stopped on tours I love it. It seems like a hip town that is trying to make more of a name for itself than just that fact that it’s the Steel City. I see lots of art, people and just STUFF happening when I’m there…Hope to see a lot of you great people out Friday night to greet me, my band and our new album! Let’s party!

Thanks Dean. I am really digging the album preview. That ‘Weird Al’ memory almost has a scary clown vibe to it.