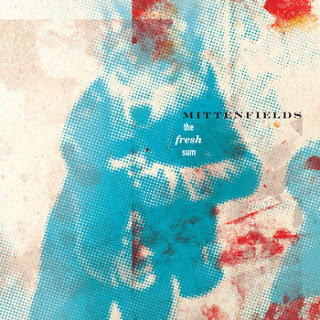 “Combining a densely layered three‐guitar attack with raw, nervy vocals, Mittenfields have drawn comparisons to some of the best indie rock acts of the 1990s. Far from an exercise in pure nostalgia, however, the DC‐based ensemble has crafted its own unique sound combining elements of indie rock, shoegaze and noise pop. Singer/bassist Dave Mann formed Mittenfields in 2008 with guitarist Sam Sherwood. After adding wunderkind math‐rock drummer Brian Moran to the mix, the lineup of the band was completed with the arrival of guitarists Donald Seale and Michael Ball in late 010. The quintet quickly headed into DC’s Inner Ear Studios, cranked up a wall of amps, and let it rip. Mittenfields released their debut EP, The Fresh Sum, in July 2011, with the tracks “My Mind Is An Avalanche” and “Goliath FTW” being featured on college radio and podcasts in the US and Canada. The band plans to return to the studio later in the year to record a follow‐up, and in the meantime is planning a series of east coast dates in support of The Fresh Sum.”

The band begins their tour in Pittsburgh tomorrow night sharing the bill with Caleb Pogyor, Elephant and Dewey Marquee. Two of the band’s guitarists Sam Sherwood and Mike Ball were nice enough to participate in this edition of First/Last.

Thanks fellas. Welcome to Pittsburgh Mike. We are very friendly here and I am sure you will fit in very well buddy.