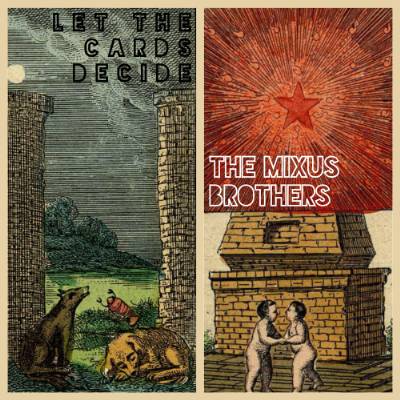 “The dusk begins to melt away into the heavens, blending the horizon into inevitable mirage. Heat waves descend in the distance as two shadowy figures begin to come into view. One: the old timer, an axe in each hand and a scowl on his lips. The other: the bandito with a short fuse and a low gauge crowd pleaser slung high on his hip. Such is the beginning, and ultimate end of The Mixus Brothers. Sworn to avenge their alleged slights they travel the dark roads of an America that misunderstands and underestimates them. They’re out for revenge, they’re coming for you…and nothing will stand in their way…so be on the lookout, Jebbh and Red think your town may be next…”

The Mixus Brothers is an Americana band from Pittsburgh who will be performing songs from their new album Let the Cards Decide this Saturday (5/7) at Diesel Club Lounge as they support Mail the Horse from Brooklyn. I want to thank Johnny Willett AKA Red Mixus (Drums/Vocals) and Jacob Stempky AKA Jebbh Mixus (Guitar/Vocals) for taking the time to participate in this edition of First/Last.

Thanks, fellas. So Jebbh, noting both Obscured by Clouds AND The Fallen Leaf Pages as faves? Dude, we have to hang!