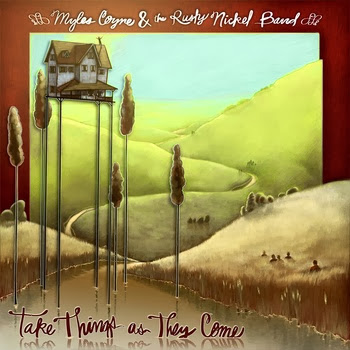 Check out the band at their official Website, Facebook, BandCamp, Twitter, Tumblr and ReverbNation. They hit Pittsburgh this Sunday at 222 Ormsby with a bunch of other cool bands touring in support of their EP “Take Things As They Come” via Top Five Records. I want to thank Myles for taking the time to participate in this edition of First/Last.

The first album I ever really bought on my own would be a vinyl copy of “Elephant” by The White Stripes. I bought the colored Red/White LP back in seventh grade. Also around that time I bought a used copy of “Siamese Dream” by The Smashing Pumpkins. Up until that point music wasn’t really a big part of my life. Both those records opened my eyes to how cool and diverse the electric guitar is. My high school chums would be quick to laugh at me & point that I used to listen to Gun’s N’ Roses back then… but I would also like to say I didn’t buy that CD.

I bought an LP from this Brooklyn band, Wilder Maker. The album is called “Year Of Endless Light”. Kind of soul/indie stuff. The singer Gabe has a really warm/lower voice. I really enjoy it. I bought the cassette tape with it as well. Turned out the tape features more songs than the vinyl!

Gee, I don’t know. Off the top of my head…? “The White Album” by The Beatles has some of my favorite moments in pop music. That’s not just a cop out answer though. Broken Social Scene: “You Forget In People” also “A Ghost is Born” by Wilco. I’d probably say that’s’ close to my favorite.

Anything that The Smashing Pumpkins have out sinse their “reunion”. Serious, its bad. I feel like they destroyed a part of my childhood. But whatever. It’s their band. Billy Corgan should bring back Zwan! I love that project. But apparently I am the only person in the world that thinks that.

I went to a Casino somewhere in Green Bay to see ‘Weird Al’ Yankovic. I went with my mom. It was awesome.

Volcano Choir at The Pabst Theater in Milwaukee, WI. Trippy, ambient band with progressive rock influence and math rock acoustic guitar. Throw in a little Bon Iver with an abundance of auto-tune and you are set!

My friends and I ran a punk fest this last summer called BREADFEST. We put a lot of love into it. I had an amazing experience with all the bands I met and people that came. The gratification of being a part of such a dope music community really warmed my heart.

Animal Collective a few years back. They were playing the material off “Merriweather Post Pavilion”. Good songs, but the sound was super loud, like painful in the least rock way possible. It was like a weird DJ set with a huge light show. The lights just made up for the boring stage show. The audience also talked throughout the entire set of the opener, Grouper. That scene wasn’t my diggz at all back then. But maybe I was just being a negative jerk.

Pittsburgh is dope! I first played PA a year or so ago with this band I’m a part of, TEMPLE. Our friend Jackson set it up. We played with Relationships. Super dope art space “Mr. Robot” I think it was called. Good peoples. Fun show. I bought a few books from across the street. The city is like Milwaukee, only covered in more hills.

Thanks, Myles. Pittsburgh is Milwaukee with hills. I can dig that… even though I’ve never been there. Isn’t that where The Fonz lived? Ayyyyyy….