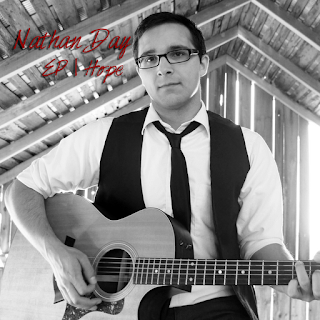 “This young singer-songwriter brings a refreshing new sound to the Canadian folk scene. Trained as a classical vocalist from an early age, Nathan Day’s talents shine through on the live stage. His music has been called both “honest” and “moving”. With the release of his latest album, Move Along, Nathan Day is proving that he has the drive and commitment to learning and improving on his craft. Nathan Day grew up in Guelph, Ontario on a street rich with musical talent. His first guitar came from a neighbour and family friend. It wasn’t hard to find inspiration in Guelph where Nathan would frequent open stages and spend nights writing and playing music in his room.”

I have been enjoying Nathaniel’s quiet folk tunes since he contacted me regarding his recently released EP entitled “Hope” under his ‘band’ name, The Nathan Day Project. My thanks to him for getting a hold of me and for taking a few to participate in this edition of First/Last.

The first album I ever bought was by the Canadian band Blue Rodeo. The album is called “5 Days in July” and still remains one of my favourite records of all time. I was pretty young at the time but I remember thinking how awesome the electric guitars sounded.

The last album I purchased was the record “Floods and Fires” by Canadian artist Craig Cardiff. It’s been a number of months since I bought it and it’s still getting play any time I’m in the car.

Tough call. I’d have to go with “O” by Damien Rice which is an incredibly well written album. A very close second is “The Hold Up” by Donovan Woods which has an awesome flow to it.

Never bought anything I didn’t like. I love it all.

The last concert I went to go see was a local show by Ambre McLean. An amazing writer everyone should check out.

Easily Craig Cardiff. He’s well known for putting on house concerts open to the public. It doesn’t get much better than being a few feet from an artist playing in a living room.

I can’t remember ever not enjoying live music, but I’ve been to concerts that get cancelled last minute and that’s never fun.

You have to respect any city that has a Penguin for their hockey mascot (hahaha). But seriously, I can’t wait to play the US in the future and Pittsburgh will be one of the many places I hope to stop by and see.

Thanks, Nathan. I have always been a sucker for music originating from North of our border. Drop a line if you make it down this way.