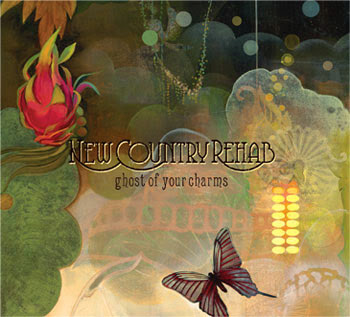 “New Country Rehab cuts through the clutter of watered-down musical imitations with a modern, high-voltage, alt-country sound. With a knockout combination of sharp innovation and a deep love and knowledge of timeless musical themes and motifs, New Country Rehab’s powerful music is full of love, loss, longing and joy. They are “more Arcade Fire than Lady Antebellum…like Canada’s answer to the Avett Brothers and Mumford and Sons” Nigel Williamson – UNCUT

Check out the band at their official Website, Facebook, Twitter and YouTube. The band performs ‘reclaimed outlaw-country music that rocks’, which you can hear on their latest album, “Ghost of Your Charms“. Better yet, see them live this Wednesday (early gig 6-8 before the game) as they stop in Pittsburgh to play a free gig Howler’s Coyote Cafe. Much thanks to John Showman (Fiddle/Vocals) for taking the time to participate in this edition of First/Last.

Queen “Greatest Hits” when I was 9. ‘Now I’m Here’ was the coolest thing I had ever heard in my life… I think it was the guitar tone that did it for me. Ended up really liking the whole record.

Magnolia Electric Company, “What Comes After The Blues”. A musician friend of mine turned me on to Jason Molina’s work and I’ve always liked his style, starting with Songs:Ohia. I was sorry to hear of his passing earlier this year.

Probably “Aereo-Plain” by John Hartford. It just has an awesome vibe and every song is as real as anyone could want.

Alice In Chains, “Dirt”. They had such a rad sound and Layne could really sing… but they turned into a bunch of navel-gazing egotists who lost my interest in a hurry.

National Arts Centre Orchestra playing Tchaikovsky in Ottawa, Canada. Before I had ever been to a rock concert I saw the world’s greatest virtuoso musicians playing with orchestras in Ottawa and elsewhere. Although folk, rock and pop music are my favorites for listening to, all the early classical exposure definitely throws some perspective on why I like the things I do.

Elephant Revival at Four Corners Folk Festival in Pagosa Springs, CO. Their main stage set was a really nice contrast to the singer-songwriter heavy lineup (albeit one I thoroughly enjoyed). They had a great sense of pacing and texture and even though I had never seen them or even heard of them, they captured my interest and connected with me as a listener.

The Sadies in Dawson City, Yukon. The vibe, the sound, the atmosphere and the surreal location just made for a perfect music experience.

Tragically Hip – Canada’s most popular band – at a big hockey arena near Ottawa. They were my favorite band at the time but the sound was brutal and I felt like they were just punching the clock.

I played the Pittsburgh Irish Festival in a Celtic band every September from 1996-2000. I was living in Montreal and so we’d play Thursday night in Montreal then drive for 13 hours, show up around 3 in the afternoon on the Friday, play about 7 sets from then until Sunday afternoon, get no sleep, drink and smoke like bandits and then drive straight home. I was so sleep deprived I felt like joining a cult by the time I’d get back every year. I’ve always loved the city and Mullaney’s Harp and Fiddle was where we wound up every night. Haven’t beenback in a long time though!

Thanks, John. I was an Irish Festival or two around that time. Can’t say I remember you there. Hell, can’t say I remember anything about those Fests. Slugging Guinness for breakfast tends to hamper the memory of the rest of the day.