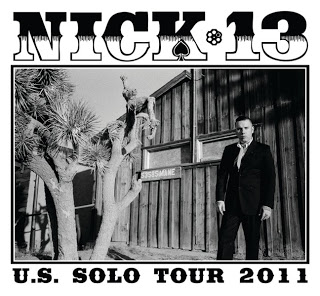 Nick 13 is the the guitarist/vocalist/songwriter for the band Tiger Army. His music has been described as “punk americana”. Last week he dropped his debut solo album. He is touring to support it and stops in Pittsburgh on Sunday. He was nice enough to participate in this latest edition of First/Last.

It was either Seven and the Ragged Tiger by Duran Duran or Shout At The Devil by Mötley Crüe, they were very close together. Probably says something about my eclectic tastes.

Sigh No More by Mumford & Sons, I haven’t heard it yet.

Tough one, especially since a lot of my favorite music is pre-60s when the album became the standard format for music. I don’t consider later collections of music from those decades to be “real” albums. Anyway, I don’t think I could pick just one, I probably couldn’t even pick one per genre.

I’ve probably blocked it from my mind. It’s such a drag when you wait for an album and it just doesn’t have any songs. I tend to take a long time between making records, but I want to make sure there’s something there.

The Replacements on the “Don’t Tell a Soul” tour.

Merle Haggard at The Grove of Anaheim in Anaheim, CA.

Probably my first punk show, The Ramones. It was right before Dee Dee left the band.

Any concert where the artist isn’t giving 100% for reasons other than medical, vocal, or not being able to hear themselves onstage.

I always remember the shows Tiger Army played at Club Laga, first with Dropkick Murphys, then later with The Damned. Both times the crowd was incredibly good. We had a fun show at Mr. Small’s on the “Dark Romance” tour in ’05, I’m looking to returning there solo!

Thanks Nick. R.I.P. Club Laga. Many Pittsburgh music fans share your fondness for that place.