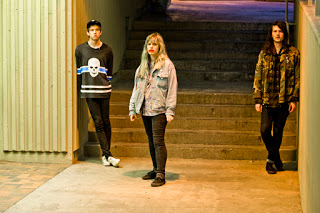 “If it was ever true (and it probably wasn’t), that whole idea of a slacker persona existing in the Pacific Northwest has gone stale. Just ask Nü Sensae, the Vancouver-bred punk trio who can’t seem to sit still. Since forming in 2007 as the core duo of menacing bassist Andrea Lukic and octopus-armed drummer Daniel Pitout, the group has essentially devoured anything that has crossed its path, doing multiple laps around North America and releasing top-shelf DIY punk records that hit he elusive sweet spot between grunge’s most aggressive freakouts and hardcore’s best songwriting. Refusing to repeat themselves, however, Lukic and Pitout have taken big risks with even bigger payoffs on this release. Proving just how unpredictable they can be, they abandoned their status as a duo — a favourite angle of both the media and fans — and recruited Vancouver noise rock great Brody McKnight as a full-time member. Previously working with the now-legendary group Mutators, McKnight has added another dimension of heaviness to the band’s already mind-melting sludge attack.”

The band return to Pittsburgh to Shady Acres tonight touring behind their latest release, “Sundowning“, via Suicide Squeeze Records along with support from Psychic Blood. My thanks to Andrea Lukic (Vocals, Bass), Daniel Pitout (Drums), and Brody McKnight (Guitars) for taking some time to participate in this edition of First/Last.

Thanks, guys. Loving the album. Definitely fast, melodic and fierce! Nice change of pace from most of the ‘indie-pop’ I always seem to listen to.