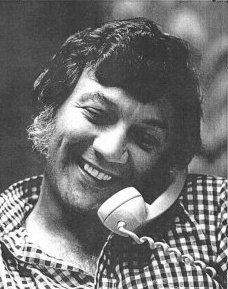 This fall, I will occasionally be switching up the First/Last series by asking local Pittsburgh personalities from various fields to participate in the Q&A. One thing these folks do have in common is their enthusiasm for music. Today I am featuring a true Pittsburgh music legend, concert promoter Pat DiCesare. Since I was a little boy, I can recall the importance of the DiCesare/Engler tag on seemingly every rock concert that occurred in Pittsburgh. To me as a music lover, it was an almost mythical thing growing up to hear “DiCesare/Engler Productions presents…” on the radio and to realize that Pat has agreed to be on my blog means more to me than he will ever know. My sincere appreciation to him for participating in this edition of First/Last.

I didn’t buy it but I was given a DJ copy of “Buddy Holly”. I was just out of high school and got a job in the record business with Coral and Brunswick Records. Buddy Holly and the Crickets was our big act. Our GM gave me a DJ copy that had ‘Peggy Sue’, ‘That’ll Be The Day’ and I think ‘It’s So Easy’. I later became the promotion guy in the area for the record company.

Chuck Corby’s latest CD called “Chuck Corby Sings the Mob Hits”. I especially like his version of ‘All in the Game’, which was a big hit for Tommy Edwards on MGM. He is a local artist and a great singer. I first met him when I wrote songs for the Del Vikings of ‘Come Go with Me’ and ‘Whispering Bells’ fame in the ’50’s and he was just starting to record. He was on the same label and I used to see him in the studio. He never made it big but he still performs a lot and people love him.

James Taylor, “Sweet Baby James”. I played it over and over when my son Patrick was born and it became his favorite too.

I have too much respect for everything that goes into producing an album to say least favorite, but I do have a disappointing one and that is “The Groove U”. Joe Rock (of Skyliners fame) and I produced it and it didn’t do too well although it was a great LP which featured a lot of great Pittsburgh artists. Procol Harum’s “Shine On Brightly” because nothing could be as great as ‘A Whiter Shade of Pale’.

I think it was Chuck Berry and Little Richard with about ten other acts at the Syria Mosque in the late 50’s. My mentor, Tim Tormey, was the promoter. I was in awe of the show and the Syria Mosque. Ten years later I would become the exclusive promoter of concerts at that building and I went on to promote many concerts with Chuck and Little Richard, who became the springboard for acts like The Beatles and The Stones.

Alice Cooper at Stage AE on July 15. His manager Shep Gordon invited my wife Kathy and son Jacob to the show. We went backstage and talked to him and took some pictures. We talked about the Three Rivers date in 1972 (almost exactly 40 years ago) I produced and promoted with him as the headliner with Peter Frampton and Uriah Heep. The show sold 40,000 tickets. We had to postpone the June 23 date to July 11 because we got flooded out by Hurricane Agnes. He is a great performer and at 63 he still is powerful and has a lot of energy. Great show!

Jesus Christ Superstar. Andrew Lloyd Weber selected Pittsburgh to open the tour. I played it at the Civic Arena and my biggest fear was the building was too large and it should be playing Heinz Hall which only held 2,700 people but it sold out the arena and I could have probably done another date.

‘Monsters of Rock’ at Three Rivers Stadium which featured Scorpions, Dokken, Metallica, Kingdom Come and Van Halen. As the promoters, we lost about $400,000 for the day. I didn’t want to promote the date but a friend of mine Eddie Leffler was producing the show and I couldn’t turn him down.

Thanks so much, Pat. I could definitely listen to your stories all day long. In a way, your work is slightly responsible for what small contribution I give today to the Pittsburgh music scene and the jury is still out if that’s a good thing or bad.