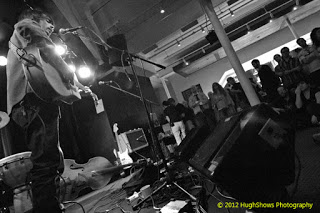 “Paul Luc is a Pittsburgh-based singer/songwriter, vintage motorcycle enthusiast, and international man of complete transparency whose interests include microbrews, home improvement (the act of, not the TV show), musical equipment, British motorcycles, ’65 Mustangs, and video games (new and old).”

Paul plays a solo set at CMU tomorrow night and if you’ve never seen him, do yourself a favor and swing by tomorrow around 7-ish. He has been busy making up some new music for his band as well as collaborating on a project called The Yellers. I want to thank him for taking a few minutes to participate in this edition of First/Last.

I distinctly remember stealing The Beach Boys, Sam Cooke and Cat Stevens from my parents. But I think the first album I ever bought with my own hard-earned money was Pearl Jam’s “Ten” album. Believe it or not, that was twenty years ago, purchased at NRM in Monroeville Mall.

Larry and His Flask, “Hobo’s Lament” or Cory Branan’s “Mutt”. Not sure which was purchased most recently.

That’s an impossible question. There are so many albums that do different things for me. If I found myself in a post-apocalyptic world stuck with a single album…it’s a coin toss between “The Freewheelin’ Bob Dylan” or Fionn Regan’s “Be Good or Be Gone” record. I’d probably go with Fionn Regan. Someone else in the world would keep Dylan’s material and I could trade gasoline or ammo for it.

There’s so much access to music online that I’ve already checked an album out before I decide to buy it…so I’m not let down often. If I buy it, I like it. I will say that I received a Jimi Hendrix/Jim Morrison bootleg as a gift and it was the biggest piece of sh*t that I can recollect. Jim Morrison was just babbling and screaming about sodomizing a woman…he’s a real eloquent poet. I think the song is called “Morrison’s Lament”. Look it up; if you make it through more than 30 – 60 seconds, I’ll be impressed.

I believe it was The Mighty Mighty Bosstones at Metropol on their ‘Don’t Know How to Party’ tour…when everyone used to wear plaid before they gained more fame. I met Dicky Barrett briefly that night and his speaking voice makes Tom Waits’ sound smooth as silk.

Frank Turner & the Sleeping Souls at Mr. Smalls. I’ve become acquainted with those gentlemen and it’s always a blast when they’re in town. I introduced them to pierogies and Duquesne Pilsner and they let me come on stage and sing along to the last song of their set…fair trade.

I don’t know, maybe the Red Hot Chili Peppers? I’m not even heavily into them, but I was right up front and got stage volume, and it was impressive to see them play a set with so much energy and passion after 20+ years of touring. I could tell they were genuinely still having fun, or they’re just damn good entertainers. In either case, it worked. I walked in expecting a good show and walked out with my mind blown. Oh, and someone should do blood tests to determine if Will Ferrell and Chad Smith were separated at birth.

Cursive. I didn’t know their material, but loved Tim Kasher’s ‘The Good Life’ side project. Went to see Cursive at Diesel a few years back and he was hammered drunk. It was obnoxious, and I was genuinely pissed off that I’d bought the ticket. I walked out after the 4th or 5th song.

Favorite thoughts, experiences about Pittsburgh?
My good times have been defined by the people I was with…and there are a lot of excellent people here in Pittsburgh. Some of my best memories are from

parties and shows in dingy basements; the location and surroundings aren’t very important. Any town or ‘scene’ is just what you make of it, and I have a lot of good friends who aren’t apathetic…so we’ve had (and continue to have) a blast here in Pittsburgh.