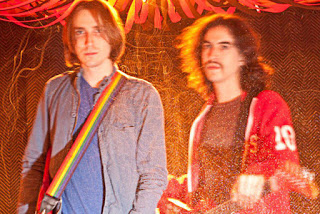 “Prison for Kids contrasts softly soaring dreaminess and garage rock aggression. The duo consists of Christopher Dreisbach and Cesar Ochoa. Dreisbach grew up in St. Johnsbury, VT, while Ochoa was raised in Juarez, Mexico. The two met at the American Film Institute Conservatory as directing students. Their eclectic taste in music and film bound them instantly.”

The guys have just released a new single, ‘Low Fevers‘ from their forthcoming LP. My thanks to Christopher Dreisbach and Cesar Ochoa for taking a few minutes to participate in this edition of First/Last.

Thanks, fellas. It’s not THAT hard to speak yinzer, just don’t try by studying ‘My So Called Life’.