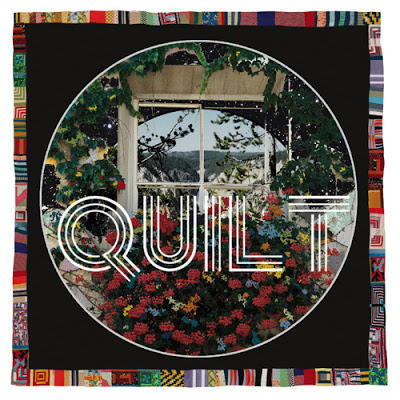 “It’s not uncommon to form a band while in college, and that is exactly what Quilt did. Its primary members, Shane Butler and Anna Fox Rochinski (as well as Taylor Mcvay—who plays on much of the record, but has since left the band amicably) were all visual art students at the School of the Museum of Fine Arts in Boston, but bonded over their mutual love of weird, experimental jams and classic pop harmonies. John Andrews joined the band as drummer after opening for every Quilt show on tour in 2009. Butler grew up in a “spiritual community with a lot of musical chanting” and Rochinski was “doing classical singing in choirs that had a lot of crazy harmonies. There’s a lot of repetitive, almost mantra stuff in our songs,” she adds. Quilt is a band with strong roots that formed at the apex of the point in your life when you’re thinking about your own art and what it all means. Then you grow up. You get married, you get a real job, life gets in the way of your art. But the support structure of the band is strong, and they powered through. This self-titled debut full length is the result.”

Check out the band on Facebook, BandCamp, Twitter and Tumblr. Today I hit Massachusetts with Quilt for my continuing coverage of the Paste 50 States Project. The band’s latest self-titled album is out on Mexican Records. I want to thank John Andrews (Drums) for taking the time participate in this edition of First/Last.

Thanks, John. Nice call on the “The Maureeny Wishful Album”. I can totally hear some influence from that and your band.