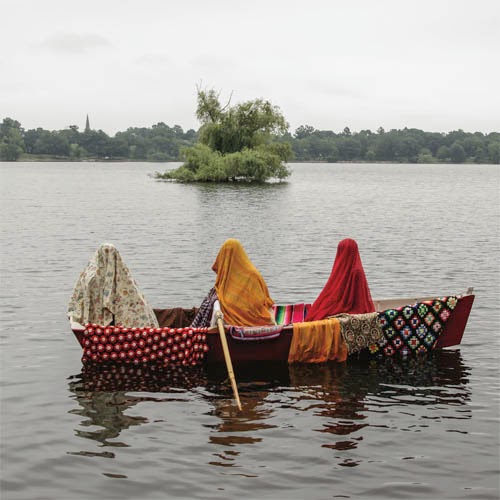 “It’s not uncommon to form a band while in college, and that is exactly
what Quilt did. Its primary members, Shane Butler and Anna Fox Rochinski
(as well as Taylor Mcvay—who plays on much of the record, but has since
left the band amicably) were all visual art students at the School of
the Museum of Fine Arts in Boston, but bonded over their mutual love of
weird, experimental jams and classic pop harmonies. John Andrews joined
the band as drummer after opening for every Quilt show on tour in 2009.
Butler grew up in a “spiritual community with a lot of musical chanting”
and Rochinski was “doing classical singing in choirs that had a lot of
crazy harmonies. There’s a lot of repetitive, almost mantra stuff in our
songs,” she adds. Quilt is a band with strong roots that formed at the
apex of the point in your life when you’re thinking about your own art
and what it all means. Then you grow up. You get married, you get a real
job, life gets in the way of your art. But the support structure of the
band is strong, and they powered through. This self-titled debut full
length is the result.”
Check out the band on Facebook, BandCamp, Twitter and Tumblr. The ‘psych-folk’ trio very recently released their sophomore album “Held in Splendor” via Mexican Summer and celebrate by hitting Brillo tonight with local fellow weirdos Shakey Shrines and Butterbirds. I want to thank Anna Rochinski (Guitar/Organ/Vocals), Shane Butler (Guitar/Vocals) and John Andrews (Drums/Vocals) for taking the time to participate in this edition of First/Last.
The first album you ever bought?
Anna Rochinski: Hmm, probably a Beatles album.
Shane Butler: Third Eye Blind on cassette was my first music purchase with my
own money in the 3rd grade.
My first LP was a Meat Puppets double LP when I was in early high school.
John Andrews: I think it was the “Yellow Submarine”, but I’m not sure. That was
a long time ago. Sometimes I forget what I had for breakfast in the morning.
Your last album bought?
Anna: Like, actually purchased and paid money for? I got some cool Talking
Heads and Connie Francis cassettes recently.
Shane: Last records I bought were a recording of a Balinese chant and a
collection of Sacred Harp / Shape Note singing at Deep Thoughts in JP.
John: Geoff and Maria Muldaur “Sweet Potatoes”. I got it from BOHO record
gallery in Lancaster, PA. The title track is a pretty magical tune.
Favorite album of all time?
Anna: I don’t think I have one!
Shane: Well, this is contestable, but I’ve found myself listening to “Tattv-Guna-Mala
Number Two” by Tirath Singh Nirmala, a collection of Rajhastani Gypsy songs
titled “Musafir” and “The Velvet Underground and Nico” quite a bit in the last
few years.
John: Pretty hard question for anyone to answer, but I would say “The Maureeny Wishful
Album”. It was Jimmy Page’s folk band in ’68. Everyone should know it, but no
one does.
Least favorite/most disappointing
album?
Anna: I don’t think I have one of these, either!
Shane: “Who Let The Dogs Out” by Baha Men, besides the single all the other
songs blew the big one.
John: If I don’t like them, I turn ‘em off!!!!
First concert attended?
Anna: The first concert I ever went to on purpose out of my own free will was
to see Aerosmith on New Year’s Eve in 1998 when I was 11 years old. My mom came
with me. It was amazing. I didn’t know about ‘opening bands’, and Candlebox was
opening and I was really confused when I first got there because they didn’t
look or sound at all like Aerosmith.
Shane: First real show I remember going to was a show of 31G bands in North
Philly when I was sixteen. The bill was Chinese Stars, Moving Units, and Kill
Me Tomorrow.
John: Hanson. 1998. My chakra exploded.
Last concert?
Anna: The last big concert I went to without being a performer in the concert
was to see Tame Impala last Spring in Boston. The last “show” I went
to was to see The Fedavees and Bobb Trimble play in Cambridge a few months ago.
Shane: Last concert was a show we played with Daniel Bachman and Ryley Walker
at the Fairfield Chapel in Oberlin, OH.
John: I saw Black Sabbath play 2 days ago, and I coincidentally had seats next
to one of my friends that i didn’t even know was going to the concert. I also
tailgated for the first time and had a jello shot.
Favorite concert ever?
Anna: Oh jeez. I mean, that Aerosmith one was insane because it was my FIRST
concert. It only happens once, you know? Ha-ha. My second concert was also a
really big deal, seeing Fiona Apple when I was 12.
Shane: Again, contestable — but the first time I ever saw this band A Faun and
a Pan Flute from Atlanta was pretty memorable. Also, the last time I saw Mike
Bruno & The Black Magic Family was very memorable.
John: Michael Hurley played in an old barn in Lancaster, PA. We all sat on
bales of hay and there were Amish girls there.
Least favorite concert?
Anna: Hah. Umm… I don’t know, I usually go to see bands that I really like.
Shane: One time, when I was in high-school, I went to go see Donovan play and
for some reason I got so bored with him telling stories that I left in the
middle to go skateboard outside. And I love Donovan. He played a good ‘Riki
Tiki Tavi’ but I just couldn’t wait for the Hurdy Gurdy at the time; I’m glad
I’ve cultivated patience on some level since then. I love Hurdy Gurdy.
John: I usually sneak outta them if I don’t like ‘em.

Any thoughts,
experiences about Pittsburgh?
Anna: I’m looking forward to playing there again, because last time the sound
at the show was so bad that we had to stop in the middle of a song because of
all the feedback. This time will be much better, I promise.
Shane: One time my friend Benjamin peed in a sink in Pittsburgh.
John: Go Penguins!!!!!!

Thanks, guys. I have been a serious hardcore fan since I heard your stuff and can’t wait to see you play.

FTC Disclosure: This post contains
affiliate links. If you make a purchase after clicking on a link, I
receive a small commission at no extra cost to you. The links helps to
support this site and will allow me to keep writing about local music.