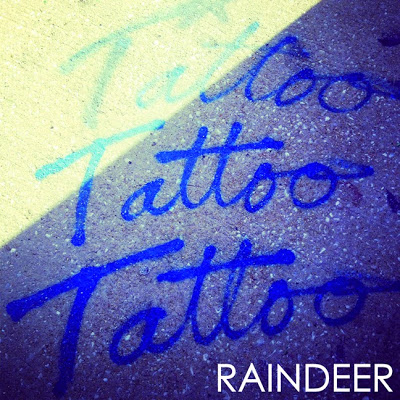 “Sugary and nostalgic Baltimore synth-pop. A mix of influences from the 50s and 80s. An extremely accessible sound that will please twee-ginas and hipsters alike.” – Ongakubaka

Check out the band at their official Website, Facebook, Spotify, Twitter and BandCamp. Hitting up Maryland on my travels through the Paste 50 States Project, I discover Raindeer who’s latest album, “Tattoo” as released this past July. I want to thank Charlie Hughes (Synth/Guitar/Lead Vocals) for taking a few minutes to participate in this edition of First/Last.

Technically the first album I ever actually bought with my own money was a cassette of the Nirvana compilation, “Incesticide”, but was forced to immediately return it when my mom saw the album title. Since I never actually got to hear it I believe my first album was either Queen “Greatest Hits” or Guns N’ Roses “Appetite for Destruction”.

Impossible question, but if I had to pick one album that is consistently really special I’d have to go with…Pixies “Bossanova”? Or maybe “Gorillaz” Self-Titled… or Mr Bungle “California”. Did I just cheat? (Echo and the Bunnymen “Porcupine”)…

I know if I hear the song ‘Summer of ‘69’ by Bryan Adams one more time I might explode into a thousand spiders that crawl our way into the nearest body of water to drown. As for worst album though, I’d have to go with whatever album that song is on.

Long Beach Dub All Stars at 9:30 Club in Washington DC.

Grandaddy with Super Furry Animals at 9:30 Club in Washington DC. I believe it was in 2003. First time ever seeing a band with a strong presence of visuals alongside the music. I remember the best moment was during the song ‘The Crystal Lake’ by Grandaddy, feeling really overwhelmed and weird in the best possible way. Close second was during the song ‘Man Don’t Give a Fuck’ by Super Furry Animals with accompanying visuals of different dictators and evil people edited to look like they were almost dancing to the music. Then there was a 10 minute solo with the keyboardist doing an insanely loud electronic section kinda in the style of a really intense Aphex Twin. The band finished the song/show coming back on stage dressed in Yeti costumes.

I’ve seen a TON of bad concerts working in music venues running sound, but the worst that I actually paid to see I guess would be Limp Bizkit at a festival in Washington DC. They were headlining and for some reason I stayed to watch them. I left pretty shortly into their set and on my way to the exit a girl with a pacifier and really big pants jumped in my face and sang “I did it all for the nookie” at me really aggressively. I was really frightened.

I’ve never been to Pittsburgh. Something I plan to change very soon as we’re currently booking a tour with our friend Gage in mid to late January with Pittsburgh being one of our planned destinations. I’m definitely excited to experience it.

Thanks, Charlie. I too have vivid memories from that final Grandaddy tour where the band was jamming while seemingly totally mesmerized by the visuals behind them.