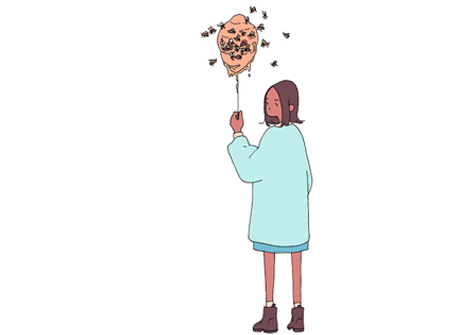 “alt/indie/rock/pop two piece band trying our best. thanks for listening! :)”

The Deutschtown Music Festival starts this week! Every day on the blog I am featuring a band from Pittsburgh who I discovered through the submission process and are performing this weekend.

Raven Clifton is an indie pop artist from Pittsburgh who is just emerging on the local scene with the help of her fantastic debut Hive Mind. Definitely catch her at the HughShows Stage (Middle and Foreland) this Saturday, July 14 at 1pm at the 6th Annual Deutschtown Music Festival. I want to thank Raven (Guitar/Vocals) for taking the time to participate in this edition of First/Last.

I’m not 100% sure about this. Might have been the soundtrack to the Rugrats in Paris movie. Or the very first S Club 7 album. Clearly I was a very cool kid.

I have two, I really can’t decide between them; My Chemical Romance’s The Black Parade and La Dispute’s Wildlife. They both have my angsty, emo little heart.

The only album I specifically remember being disappointed by was The Killer’s Sam’s Town. But then I listened to it a few times on a cross country road trip and fell in love with it a little bit? So I guess I end up liking anything that I hear enough times.

It might have been Mindless Self Indulgence? Very weird first concert experience. Lots of people in costumes. I did not understand what was going on.

Favorite concert ever?
Green Day. I saw them for the first time after 21st Century Breakdown came out. They played for like 2+ hours straight and were high energy the whole time, it was amazing.
Least favorite concert?

I once went with my mom to see Def Leppard. Oof. That was not for me. Favorite thoughts, experiences about Pittsburgh?

I’m just slowly starting to get into the music scene here and I’m really excited to become a part of it. I think it’s awesome how many dedicated, passionate people there are here who are (and have been) building up the local music scene with events and festivals and all this DIY jazz. It’s a great place to be.

Thanks, Raven. I have to tell you that I really do love your music. I cannot wait to see you perform this Saturday! And by the way, Def Leppard isn’t TOO bad…