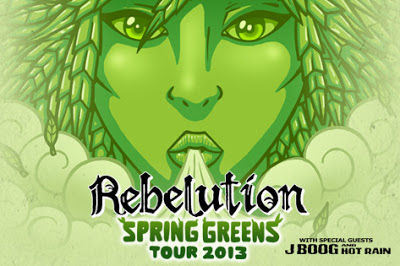 “Rebelution has developed into a front-runner for grassroots, independent and tour driven music groups. Originally formed in 2004, members Eric Rachmany (vocals / guitar), Rory Carey (keyboards), Wesley Finley (drums), and Marley D. Williams (bass) met in college, while residing in Isla Vista, a popular beachside community in Santa Barbara. New Orleans saxophonist and multi-instrumentalist Khris Royal was recently added to the group. It was there that the seeds to Rebelution’s future were planted creating inspiring and engaging music that would leave their listeners with the sense that they have the power to make this world a better place. The band continuously tours across the USA, have ventured to South America, Guam, Hawaii, Aruba, New Zealand and Europe, and performed at Bonnaroo, Outside Lands, Lollapalooza and Austin City Limits among others.”

Check out the band at their official Website, Facebook, Twitter, iTunes, YouTube and Instagram. They stop in Pittsburgh tonight at Smalls with support from J Boog and My thanks to Wesley Finley (Drums) for taking a few minutes to participate in this edition of First/Last.

The first albums I bought were through one of those mail order catalogs that were big in the 90’s. I can remember buying Nirvana’s “Nevermind”, the Bob Marley classic “Legend”, and TLC’s “Crazy Sexy Cool”. My mom took the Nirvana booklet because of the naked baby as well as the TLC booklet because it talked about sex and AIDS.

The last album I bought was “Hummingbird” by Local Natives. Their sophomore album does not disappoint. It’s no wonder these guys are in high demand right now. I remember seeing them with only 100 other people at an unannounced ACL afterparty and after that I was hooked.

My favorite album of all time is “El Cielo” by Dredg. It’s not really a for-fun party album but more of a concept album that takes you on an adventure through dreams and sleep paralysis. I listen to it on long drives and when I need inspiration.

I won’t name names but there were so many bad albums in the 90’s. Somehow we lost the idea that an album should be good from front to back and instead focused on singles with fluffer songs in between. I bought a number of albums for their radio hit only to be disappointed by the rest of the material.

The first concert I remember attending was with my mom for a country band called Ricochet that happened to be playing at the county fair. I got into country at that time by parental influence but I can’t say I like much of the new country coming out today. The sounds have gotten really poppy and I notice a lot of cross-genre covers as if they’re running out of ideas or trying to stay relevant.

The last concert I attended was an underground hip-hop show by The Grouch and Eligh. They were among the first real hip-hoppers I started listening to as I moved away from mainstream rap. I found conscious lyrics and eloquent wording in hip-hop that I wasn’t getting from rap and its constituents.

My favorite concert experience was hearing my favorite band Dredg play one of their best albums “Catch Without Arms” from beginning to end. After having listened to it so many times it was cool to see it performed without interruption. My mind felt like I was listening to the album but I was watching it all happen and seeing them play songs I would never ordinarily see them play at a regular show.

My least favorite concert experience occurred when I saw Lauryn Hill play at the same festival as us about 4 years ago. The sound mix was not very good and the entire time she was on stage she was complaining about the sound when she should have just sucked it up and played through it. She sang half the lyrics while calling out the sound and monitor engineers. It was an awkward experience.

Pittsburgh has always held it down for us. A big thank you goes out to the fans who have been following us for years and continued to come out wherever we might be playing. Oh yeah, and as a Giants fan, thanks for giving us Barry Bonds all those years back!

Thanks, Wesley. As for Barry Bonds, you can have him. Dude’s a real dick, anyway.