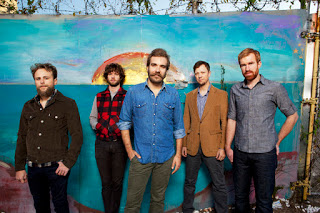 “Led by singer-songwriter Scott Terry, Red Wanting Blue is proudly based in Columbus, Ohio, but might as well be America’s local band. For years, the group had been hiding in plain sight as Terry went about logging thousands of miles on the road throughout the nation’s heartland, making fans the hard way – one at a time. With only the aid of word of mouth, hard work and perseverance, Red Wanting Blue has established an exceedingly loyal following in and around the Midwest where the band regularly fills clubs normally reserved for bigger names. Terry’s passionate and poetic songs, anchored by his powerful baritone, are the kind of tunes that could only have been written by a man who has lived this kind of life on the road. It’s these songs and Terry’s moving delivery of them that knocks ’em dead, but leaves ’em talking. Most importantly, it keeps ’em coming back for more.”

The band stakes out an impressive two night residency at Club Cafe this upcoming weekend with The Floorwalkers supporting Friday and Nameless In August opening Saturday. My appreciation to Scott Terry for participating in this edition of First/Last.

Thanks for letting me ramble! See ya soon! Thanks Scott. Hey man, I for one love when musicians ‘ramble’ for these Q&As.