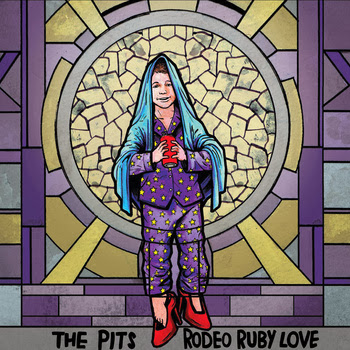 “For the last seven years, Rodeo Ruby Love has tried to become synonymous with Indiana: honest, hardworking, non-assuming and a little bit behind the times. The songs are rooted in the pop-country radio and church hymns that shaped founding member Zachary Melton’s childhood, while the energy and passion bloomed from the central Indiana hardcore scene. Rodeo Ruby Love has always sought to tell real stories, vulnerably exploring truth in the emotions we experience when life and love collide—the heartaches of friendship, the exhilaration of relationship, and the innocent angst of trying to get to second base. The songs were distinctly Mid-western: small town problems of small town boys and girls played to the biggest sound they could muster.”

Check out the band on Facebook, Twitter, BandCamp and Tumblr. I hit Indiana today on my journey through the Paste 50 States Project with the pop/rock of Rodeo Ruby Love. The band’s latest effort their fourth full-length, “The Pits” via The Pentimento Music Company. I want to thank Zachary Melton (Guitar/Vocals) for taking the time to participate in this edition of First/Last.

When I first started buying music, I was very into buying CD singles. I remember buying Fiona Apple’s ‘Criminal’ single, as well as Dru Hill’s ‘Somebody’s Sleeping in my Bed’. The first full length album I bought may have been the “Az Yet” self-titled album.

That is a tough one so I will give you top 5: Twothirtyeight “Regulate the Chemicals”, Songs:Ohia “Ghost Tropic”, Counting Crows “August and Everything After”, At the Drive In “Relationship of Command”, Canterbury Effect “An Exercise in Humility”.

I was pretty disappointed in Fiona Apple’s “Idler Wheel.” I waited so long because I love her other albums so much. I still try to crack into it, but there are only about 3 or 4 songs that I enjoy. Now I have to wait another 8 years for the next one!

My first big concert was when I was about 12 years old. My dad took my sister and I to see Counting Crows and The Wallflowers at Deer Creek in Indianapolis. It was a makeup present because he didn’t take me to see Hootie and the Blowfish earlier that year. I’d say it was a pretty great makeup!

The last show I saw, I think, was a bunch of my friends playing in our basement. The last big concert I attended was Ben Folds Five at the Old National Center in Indianapolis, which was a dream come true. I thought I’d never get to see them!

Seeing Do Make Say Think at The Metro in Chicago. I took this girl with me as my date. She was bored and was texted throughout the performance. I was brought to tears. They put on an incredible show. Needless to say we didn’t go on another date and now she’s a lesbian.

People will probably hate me for this one. But I bought a ticket to see a show that featured Minus the Bear, These Arms Are Snakes, Criteria, and Big Business. When I got to the show I found out that Criteria, the only reason I came (and to this day one of my favorite bands) had dropped off the tour. I really didn’t care for the other bands. I was excited to see TAAS but they were so silly on stage. I was in a pretty rotten mood that night!

I’ve only been to Pittsburgh twice. The first time was magical. I forget which highway it is, but you are coming around a corner and through a tunnel and suddenly there is the city on the water. What I saw, I loved. The second time was one of the most disastrous shows of my life. Our van broke down and we ended up sleeping in a college dorm lobby. So I have mixed reactions. Plus, I’m still bitter about that Colts defeat back in 2005.

Thanks, Zachary. I can relate about that least favorite show. I went to see R.E.M. in Hershey and was gassed to see opener Grant Lee Buffalo. I was pissed when they weren’t there and could care less about the opening band taking their place… Radiohead. I kinda wish I did pay attention. Also, Nice call on “Ghost Tropic”. First time I saw Songs;Ohia, I asked Jason to pick any one album of his I should buy and he picked that one.