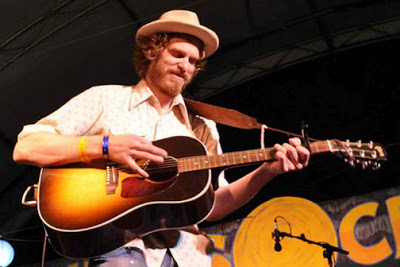 The Deep Dark Woods are a Canadian folk rock band that will release their latest album, ‘The Place I Left Behind‘ in the U.S. October 18th on Sugar Hill Records. Lead singer Ryan Boldt was nice enough to take the time to participate in this “Great White North” edition of First/Last Friday.

I can’t really remember, the first album I ever bought with my own money was probably Blind Melon’s Soup, I didn’t really own any albums before that, I just listened to what my older brother bought.

I think it was George Jones’ Trouble In Mind.

There are so many, but the one I continue to listen to time after time is Bob Dylan’s Time Out Of Mind and Love and Theft.

My dad took me to BB King in Saskatoon when I was a kid. It changed my life. That’s when I started listening to good music.

Neil Young and Bert Jansch in Winnipeg, it was the day The great Ben Keith died. Neil played solo, it was one of the finest concerts I’ve ever been to. Bert Jansch also blew my mind, I’ve been wanting to see him for years.

I saw Tom Waits at the Commodore Ballroom in Vancouver with my brother Jeff, there was only 900 people in the audience, I was front row and Mr. Waits killed it, he played for nearly two hours, I’ve never seen anything like it and I probably never will again.

I saw Dave Matthews Band in Portland, the band was awful and the crowd was filled with jocks getting pissed drunk on 8 dollar beers that wouldn’t shut up and listen.

I’ve never been to Pittsburgh, but I love the Penguins, I’ve been watching them since the Lemieux/Jagr days, I remember them beating the North Stars and than the Blackhawks on CBC TV when I was a kid. My favorite football team is the Steelers, because, well they’re the greatest of all time and Hines Ward and Troy Polamalu are my favorite NFL players. I love any Pittsburgh sports teams.

I love Sidney Crosby, I love Malkin, I’m pumped for Neal to play with Crosby, I love Kunitz, he’s from Saskatchewan, I love Dupuis and Fleury and I love Brent Johnson their backup. I watch every Penguins game that is broadcast and I think Mike Steigerwald is the finest hockey commentator of all time. Pittsburgh is the City of Champions, they will win the cup next season if Sid can stay healthy.

Thanks a lot Ryan. This new record is really nice! And Pittsburgh will welcome you anytime bud.