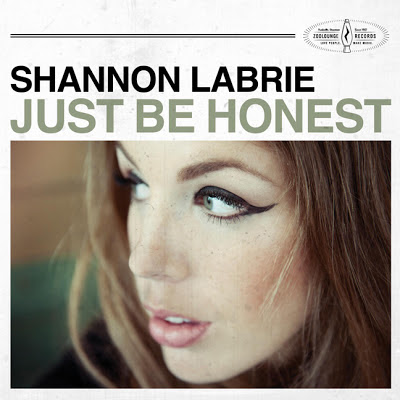 “On Shannon Labrie’s debut album Just Be Honest, she kicks off the proceedings by staring down her demons and admonishing her biggest fears with “Secret,” a retro-R&B influenced song laced with vibrant horns. The young songwriter comes by her fears honestly, battling a serious (and ongoing) illness at age 9 and losing her father at 14. She grew up fast, at first rebelling, then spending several years on a curious solo journey across the country studying philosophy, theology and writing songs before settling into Nashville’s thriving independent music scene. Adept on the piano and guitar, the singer/songwriter says she was “raised on James Taylor and Lauren Hill.” Music Connection named her as one of the “Best Unsigned Artists of 2012” and she was featured alongside Brooke Waggoner, Matthew Perryman Jones and others on the Nashville Indie Spotlight, a digital sampler available exclusively on iTunes.“

Check out Shannon at her official Website, Facebook and Twitter. She has released her debut, “Just Be Honest” on Zodlounge and performs tomorrow night in Harmony, PA. My thanks to her for taking a few to participate in this edition of First/Last.

Thanks, Shannon. 446 bridges? Suck it, Venice! To be honest, as a lifelong resident, it really only seems like 445.