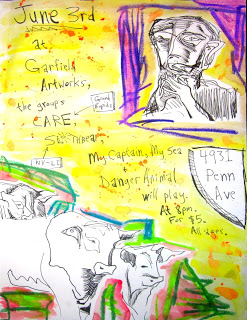 “Born b/w September 1988 and February 1990 and active since 2008, Slothbear recorded Slothbear EP in spring 2008 on a broken 4-track. Somepeople liked it, others did not. In fall of 2010 Slothbear recorded a new EP, “Canter On”, in Josh’s dilapidated old house. More autumnal and wistful, Cee once tweeted that the release was “more depressing with vaguely krautrock leanings spooky piano doug sings etc etc” and also postulated, via Twitter, that “[the] difference between the new slothbear record and the old one can be summed up by the fact that we say areolae where we once said labia.”

The band kicks off it’s latest tour in Pittsburgh. Check out a video of them performing here. One of the band’s guitarists and vocalists Craig Heed took a few minutes to participate in this edition of First/Last.

Foo Fighters’ “The Colour and the Shape”, or maybe the Godzilla soundtrack with Puff Daddy and the alternate version of ‘Brain Stew’ on it.

This is depressingly hard to remember. I remember buying “Odessey & Oracle” by The Zombies the same day I bought Djivan Gasparian’s “Art of the Armenian Duduk” CD. My grandpa had just gotten me the instrument and I thought it’d be an interesting listen. It turned out to be extremely disappointing and a good runner-up candidate for the question two numbers down from here, although Grandpa busted out some YouTube clips to assure me the instrument ‘could rock.’

I can’t actually answer this question, but the one I’ve been listening to the most lately has been “The Piper at the Gates of Dawn”. I think I’m more a Syd Barrett fan than a Pink Floyd fan, but this is the best thing he was a part of in my opinion.

The three-year wait for The Strokes’ “First Impressions of Earth” was fairly demoralizing, though there were a couple good songs.

The Strokes @ Central Park SummerStage, May 2004.

Saw our friend Dan Arnes’s new band Leapling at Big Snow Buffalo Lodge in Brooklyn this past weekend. They were great, especially considering it was their first show.

To complete this Strokes trilogy, in the throes of my disappointment over “First Impressions”, I found salvation in the form of winning free tickets to see them from K-ROCK. It was one of those cases where the band seemingly knows the fans want the old hits, and they delivered more mightily than ever before.

In the early, rambunctious days of Slothbear, we went to the now-no-more Siren Fest that was held every summer at Coney Island to see Stephen Malkmus & the Jicks. While walking around during the openers we actually ran into Malkmus by the whack-a-mole. Clutching a spindle of the seminal SLOTHBEAR EP, I was too shameful to pull the trigger. Later during his set, we reasoned (we were 18-19 years old) that frisbeeing the CDs onto the stage would make a good impression. My last one was on a crash course for his forehead, had he not incidentally ducked just moments before.

Very excited to play this show and see the city for the first time. Hey, the Pirates are almost at .500 this year!

Thanks Craig. Just to be straight…as of last night the Pirates are exactly at .500 thank you very much.