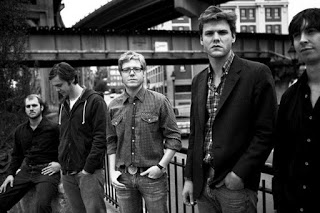 “Bill Wilson is from Central Virginia. He is a professor of philosophical theology, a songwriter, an expert on southern literature, and a father of six. His three eldest sons returned to Virginia to start a rock band in 2006 with long-time musical compadres Seth Green and Todd Wellons. As a tribute to the man who taught them how to play guitar, write songs, drive a stick-shift, and back up a trailer, the band decided to name themselves Sons of Bill. In the summer of 2011 Sons of Bill entered Sound of Music Studios in Richmond VA, with producer David Lowery (Cracker, Camper Van Beethoven) to record their latest record “SIRENS.” The band describes this record as a musical arrival point, and will be released on March 26th 2012.”

The band plays Greensburg’s freevoutdoor summer concert series tonight. My thanks to Vocalist/Guitarist/Son James Wilson for taking the time to participate in this edition of First/Last.

Thanks, James. Brian Jonestown Massacre is also a disappointment for me as well. Not because of the band though. The audience was the problem. Smoking (meth?) and blitzed out of their mind…gross!