First/Last-Sons of an Illustrious Father 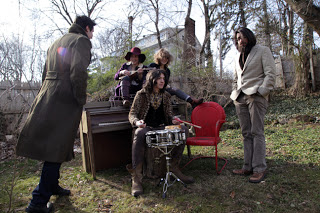 “Sons of an Illustrious Father is a four-piece folk/blues/americana/country -inspired rock band from New York that may at a given moment consist of any combination of quadrophonic vocals, banjo, acoustic guitar, electric guitar, upright bass, violin, organ, accordion, and drums. Sweet enough to make Tom Waits cry, mean enough to beat up CSNY.”

The ‘heavy meadow’ band hits Pittsburgh tonight at the Lile Coffee*Shop in Polish Hill. My thanks to Lilah Larson (Vocals/Guitars/Banjo) for participating in this edition of First/Last.

Thanks, Lilah. Gotta keep an eye on trespassers. Still sounds fun though.