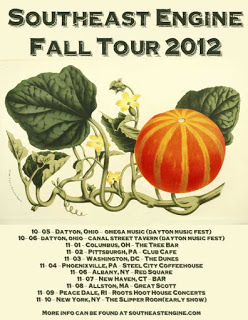 “There is truth about American life and there are the lies we tell ourselves. There are stories hard to explain, and stories we prefer not to dwell upon. Today workplaces remain shuttered, jobs moved abroad. In Appalachian country there is talk of ‘retraining the workforce.’ We lament remarkably little about this lost way of life. And then there is Southeast Engine, a proudly working class band that concerns itself in no way with the conventions of our current ‘indie rock scene.’ Southeast Engine’s acclaimed 2011 release Canary was a revelatory reflection on an Appalachian family making ends meet during the our first Great Depression, with ghostly resonances to the same population’s contemporary struggles. Canary was replete with songs of joy in the face of sorrow – meditations on retaining a fleeting way of life still maintaining all of the conviction and jovial camaraderie of a rich culture proud in its traditions despite the long odds posed by a rashly remade society.”

The Ohio band returns from across the state line tomorrow as part of it’s fall tour to Club Cafe for the late show with support from my buddy Dan Getkin and the Masters of American Music. My thanks to the band for participating in this edition of First/Last.

Thanks again, fellas. Pittsburgh is sorta becoming a home away from home, which is great IMO.