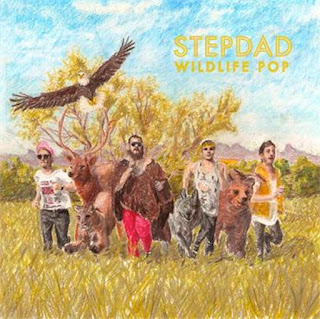 “Stepdad was forged in an unrelenting bath of summer heat on Chicago’s south side in 2009 by songwriters/producers/college dropouts/solid bros Ryan McCarthy and ultramark on the foundation of their joint worship of Roland Orzabal and Brian Wilson. After a few quick months, the still nameless duo was sitting on a small mountain of songs. The name Stepdad was arrived upon by a random phrase generator and adopted without regard for the impending banality of rehashing that story during interviews. “Wildlife Pop” presents a creative leap forward for Stepdad, expanding their already massive pop sound. “Will I Ever Dance Again” and “Must Land Running” successfully transplant their aptitude for unforgettable choruses into a larger sound bed while the galactic rainforest sensations of “Treasure Hugs”, “Exploring”, and “Starfriends on Earth” create the cathartic urge to sprint barefoot through a gauntlet of scorpions on a municipal trail paved with searing drywall screws (fortunately for listeners everywhere, this compelling inclination would be devilishly hard to act upon).”

The band releases “Wildlife Pop” this Tuesday via Black Bell Records and will be on the bill at the Warped Tour at First Niagara Pavilion on July 12th. I want to thank ultramark for taking time to participate in this edition of First/Last.

Thanks, Mark. Your music is nothing I expected from a band that’s on the Warped Tour. Thanks for totally awakening my senses when it comes to preconceived notions like that.