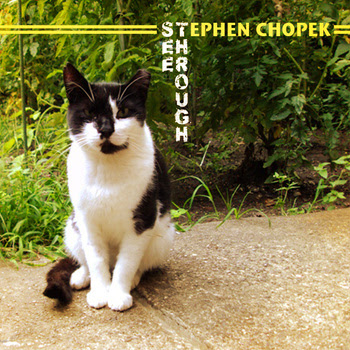 “Stephen Chopek (aka SodaCan) lives and works as a musician and artist in Jersey City, NJ. He is a multi-instrumentalist and self-taught artist. His work explores the connections that exist in the process of creating music and visual art. Chopek’s music is the sum of many parts – what he terms audio collage. Individual elements are both created by the artist and sampled from previously existing sources. They are then gathered, categorized, arranged, dissected, deconstructed, sliced, diced, manipulated, repeated, rearranged, recycled, reused, and molded into original compositions.”

Check Stephen out at his official Website, Facebook, BandCamp and SoundCloud. Stephen returns to Pittsburgh this Thursday at Howlers with locals Neighbours and Paddy the Wanderer. I want to thank Stephen for taking the time to participate in this edition of First/Last.

The first album I ever bought was a cassette. Van Halen “1984”. I still have it.

I listen to a lot of new music; but to be honest with you, I can’t remember the last time I bought an album. The closest thing would be a CD trade I did with a band from Austin, TX called Diving. I recently shared a bill with them at The Meatlocker in Montclair, NJ. I traded them my CD, “See Through”, for their EP, “Places And Objects You Find There”. It’s really good. Check it out.

Wow! That’s a tough one. I’ll have to go with The Beatles “Revolver”.

That’s also a tough one. I usually listen to an album at least album twice all the way through before I make my decision. I can usually find redeeming qualities in most records. While I was on tour last year, I listened to the audio version of the Keith Richards book, “Life”. It got me inspired to get my hands on as many Rolling Stones albums as possible and listen to them chronologically. I was having a great time until I got to “Voodoo Lounge”. It wasn’t a complete disaster, but definitely not one of their shining moments.

The first concert I ever went to see was Yes when they were touring in support of their album, “90125”. It was quite some time ago, and I was sitting far away (in a big arena); so I don’t remember the details, but I was kind of enthralled by the grandiosity of the whole experience.

Most of the live music I see is other acts on the bill before or after I play a set. It’s rare that I’m at a show as a spectator only. The last show that I attended as an audience member was David Pajo at Le Poisson Rouge in New York City. He was playing songs from his Papa M album, “Live From A Shark Cage”. That album is beautiful, as was the performance.

I’ve seen a lot of stellar shows, but one that sticks out in my mind is Paul Westerberg at Lupo’s Heartbreak Hotel in Providence, RI. He was on tour for his first solo album, “14 Songs”. I’m a huge Replacements fan, but I never got to see them live back in the day (although, I may get a second chance since they recently confirmed some reunion shows). He sounded great and the band was fantastic.

This wasn’t a concert, but it involved two of my favorite musicians. A few months ago, I attended a lecture at New York University that featured David Byrne and Questlove (Amir Thompson). The moderator was asking them questions about their experiences in the music world (and beyond). I have great respect for them both as artists, entrepreneur, authors, etc. The evening had great potential, but Questlove would not stop talking. It got really frustrating after a while. When David Byrne managed to squeeze in a few words, Questlove would interrupt him in mid-sentence. He was totally unaware of how rude and disrespectful he was being.

I’ve been to Pittsburgh many times throughout the years at different venues with lots of bands. I like it more each time. It’s a friendly place with a strong music and art scene. Whenever I get the chance, I like to see what’s happening at the Mattress Factory and the Warhol Museum. Frank Lloyd Wright’s Falling Water (in Mill Run, PA) is also a highlight. My first solo show was in Pittsburgh at Hambone’s this past May. I’m looking forward to perform at Howlers.

Thanks, Stephen. Jeez…?eustlove sounds like a real douche. He ‘played’ (read:DJ’ed) CMU a few years back and his rider leaked online. Dude is a douche.