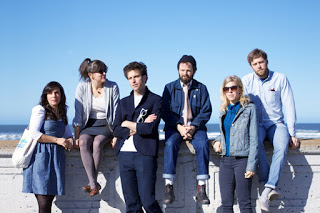 “San Francisco’s favorite hammjammers Still Flyin’ spent 2011 hard at work writing their sophomore album, On A Bedroom Wall, which is slated for release May 22, 2012 via Ernest Jenning Record Co. Still Flyin’ have been redefining indie-pop since 2004, drawing inspiration from classic pop songwriting and great times with great friends. Led by Sean Rawls of Masters of the Hemisphere, 2009’s much loved Never Gonna Touch the Ground established the band’s fun-loving credo, and saw them touring the world, with a little help in their live show from the likes of Isobel Knowles (Architecture in Helsinki), Mark Monnone (Lucksmiths), Josephine Olausson (Love is All), Gary Olson (Ladybug Transistor) and Yoshi Nakamoto (Aisler Set). The band supported the release with show-stopping sets at SXSW, The GreatEscape and All Tomorrow’s Parties (curated by Pavement).”

The band will be playing Pittsburgh tonight. My thanks to Sean Rawls for participating in this edition of First/Last.

Thanks, Sean. I just love San Francisco. Spent my honeymoon there and I have been dying to go back ever since.